It is often claimed that Missouri is a low-tax state (which it is not), but it is painfully clear that some of Missouri’s cities are certainly not “low-tax” cities.

The sales tax rate in St. Louis is now one of the highest in the nation, only behind places like Chicago and Seattle. Currently, the base sales tax rate in the City of St. Louis sits at 9.679%. So, when you shop, you’re paying nearly 10% extra in taxes, and when you shop in one of the many areas with overlapping special taxing districts, you’re paying close to 12%. The rate is high relative to other cities, and it is high absolutely—it is pretty darn expensive to spend your own money in the Arch City.

The chart below depicts the base sales tax rate in St. Louis over the past 20 years. Slowly and steadily (and sometimes in quick bursts), it has been on the rise. 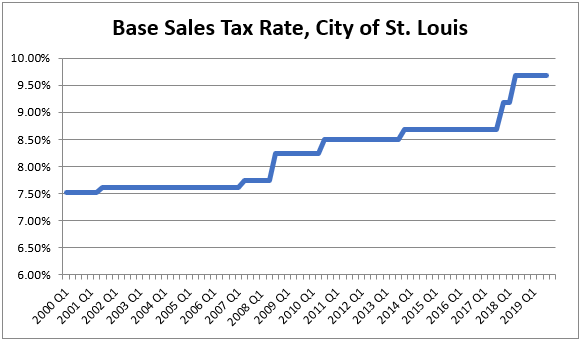 Recent increases are due to special sales taxes for additional public safety funding and expanded economic development initiatives (like the north–south MetroLink expansion, which is unlikely to spur any development).

As I’ve written before, with each increase in the sales tax rate, policymakers will have fewer and fewer chances to go to taxpayers for projects that truly need funding. St. Louis may soon reach a point where the public is simply unwilling to cough up more of its money, however pressing the public need. Some residents and businesses may just call it quits and move elsewhere.

Moreover, we should all ask ourselves whether we’re getting the government we’re paying for. When the city has basic infrastructure woes (you should see the road I drive on every day for work), has trouble keeping refuse trucks running, and seems most occupied with giving away subsidies, it is hard to believe St. Louis government is worth nearly 10 cents on the dollar (in addition to the numerous other taxes it levies).

Policymakers, like the rest of us, could always use extra cash. But there is a point at which we must make do with what we have. St. Louis officials should begin tightening their belts instead of asking for more, just like the average taxpayer must.