Show Me Institute Policy Analyst Patrick Ishmael joins host Don Marsh of KWMU and and Jack Strauss, Director of the Simon Center for Regional Forecasting at Saint Louis University to talk about the pros and cons of raising the minimum wage.

Hundreds of thousands of American workers are paid the minimum wage. It’s $7.25 nationally and $7.35 in St. Louis. While the perception may be that minimum and low wage jobs are mostly held by teens, the vast majority, 75 percent, are adults over the age of 20.

Recent local news reports have highlighted protests by minimum wage earners. They are demanding that their pay be nearly doubled. The campaign is called “St. Louis Can’t Survive on $7.35.”

Host Don Marsh talked with Martin Rafanan, a Lutheran minister, activist and director of the St. Louis Can’t Survive on $7.35 campaign. Angela Harrison, a local 33-year-old McDonald’s employee who makes $7.75 an hour also joined the program to talk about the challenges she faces with making just above the minimum wage.

In the second half of the program Jack Strauss, Director of the Simon Center for Regional Forecasting at Saint Louis University, and Patrick Ishmael, Policy Analyst at the Show Me Institute, joined Marsh to talk about the pros and cons of raising the minimum wage.

Director of Government Accountability
More about this author >
Related Articles
This Giving Tuesday, Stand with Us 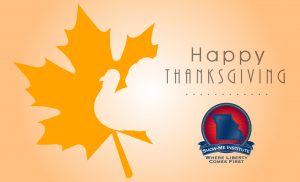 Happy Thanksgiving
Connect With Us