You Can Call Them Buzzards, But That Makes Missouri The Carcass

Another day, another governor courting — or as some are saying, “trying to poach” — Missouri’s businesses. This time, it’s another Rick: Florida Gov. Rick Scott.

Gov. Rick Scott is teaming up with a fellow Republican governor this week in urging businesses based in Missouri to head to states with better business climates.

With Gov. Jay Nixon vetoing $700 million in tax cuts earlier this year, Scott is calling for businesses to move from the Show Me State to the Sunshine State….

Scott’s office sent a letter to Missouri businesses earlier in the week, highlighting Florida’s business climate. So far this year, Scott has sent similar letters to businesses based in California, Colorado, Connecticut, Illinois, Maryland, Massachusetts, Minnesota and New York. Like Missouri, all of those states have Democratic governors.

You may not like The Ricks, but the fact of the matter is that when you look at where Missouri’s money is moving these days, Florida is high on the list of its destinations. Like Texas, it is a serious threat to Missouri’s economic future.

How do we know that? Let’s start with Saint Louis County as an example, from the website How Money Walks. Where has the wealth from Missouri’s largest county been moving since 1992? (Graph omitted for space.) 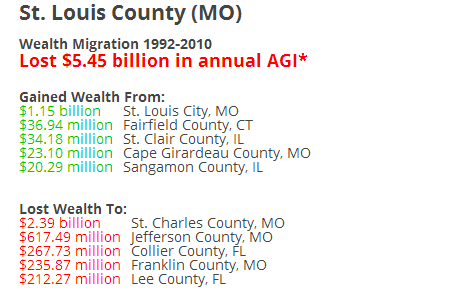 Of course, Florida isn’t the only threat. Which state is an obvious threat to the wealth of Jackson County, our second-largest county? (Again, graph omitted.) 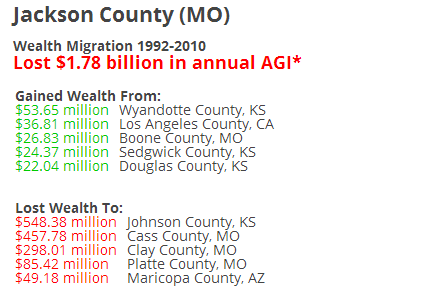 Missouri is not powerless in all this. We should be actively seeking ways of making the state a better place to live, work, and play — not a better place to grow government. Frankly, it’s frustrating to hear politicians with a penchant for false bravado act like this cash exodus isn’t happening. For once, policymakers, try empowering Missourians to grow this state rather than turning them into Texans, Kansans, and Floridians through your inaction. Stop the excuses. Enough is enough.

Sorry, Non-KC Residents . . . The Star Doesn’t Care for Your Opinion
Connect With Us