Sorry, Film Directors: Taxpayers Should Not Have To Pay For Your Luxury Hotel Rooms

Film director Jennifer Lynch told KSDK Channel 5 that Saint Louis is the perfect place to shoot her film, “A Fall From Grace.” The film is about a “homicide detective tracking a serial killer along the Mississippi River who burns his victims.”

But the problem, Lynch says, is the lack of financial incentives available for movie production in Missouri. Though the state still offers the film production tax credit, Missouri Gov. Jay Nixon shut down the Missouri Film Commission in 2011, and the Missouri Accountability Portal shows that no film tax credits have been issued for 2012.

Missouri actually has $4.5 million to use for tax breaks, but the Department of Economic Development doesn’t have anyone to recruit out-of-state productions.

“It hurts the city, it hurts the state and it ultimately hurts us because we’re forced to go elsewhere for monetary reasons,” said Lynch.

One way to answer the question of whether a lack of film tax credits hurts the state is to look at what film tax credit money has subsidized in the past.

The 2009 film “Up in the Air,” which starred George Clooney, was filmed in Saint Louis, and was issued $4.1 million in tax credits from the state. Under Missouri’s Film Production Tax Credit program, movie productions are reimbursed for a portion of their expenses.

In 2010, the Show-Me Institute requested documentation from the state Department of Economic Development (DED) that showed what expenses associated with the film tax credit program were deemed eligible for partial reimbursement. The documents we received are now posted online.

Below are some expenses that the production of “Up in the Air” incurred and the DED deemed eligible for the Film Tax Credit program:

* More than $11,000 in living allowance money for Director Jason Reitman.

* More than $8,500 in living allowance money for Vera Farmiga.

If having state taxpayers fund living expenses for high-paid actors and directors while working on “Up in the Air” is not concerning enough, recent reports have found state film tax credit programs lacking.

If Lynch really thinks Saint Louis is the best place to film her movie, then make it here. But if tax credits are necessary, I would prefer she stay in East Saint Louis.

P.S. Lynch is not the first person to think that using film tax credits to subsidize a movie about a serial killer is a good idea. Jack Donaghy ran with that in 2011. 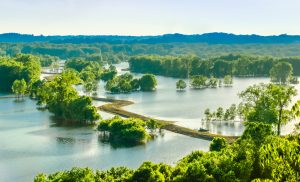 Back for More Handouts
Connect With Us