The Missouri Legislature is considering allowing parents in larger communities (more than 30,000 residents) to access a portion of their state education funding for use outside the public school system. In typical fashion, many rural legislators want nothing to do with such a program and believe that the parents in their district don’t either.

Let’s take a look at some enrollment data to see if that checks out. The following table contains only those districts that saw a 10 percent or higher enrollment drop between 2019 and 2020, as measured by the Missouri Department of Elementary and Secondary Education (DESE). 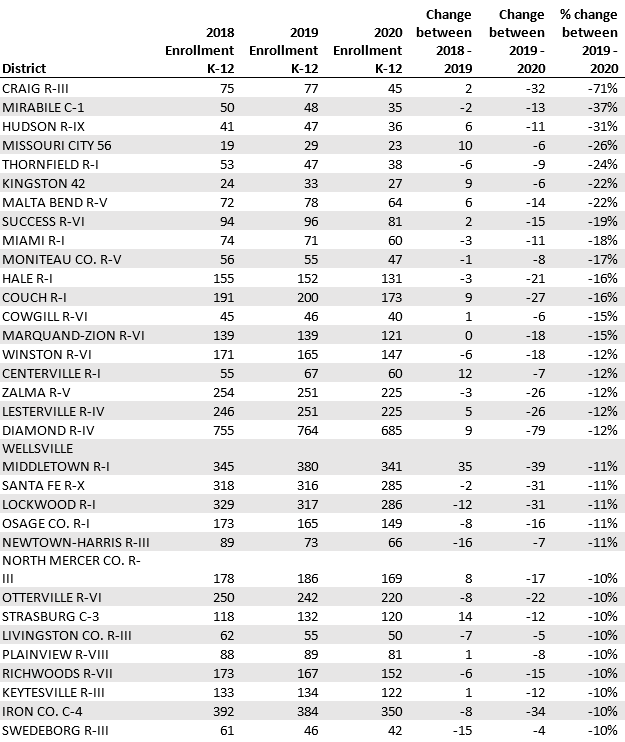 As it turns out, quite a few parents chose to leave small rural districts. These districts only enrolled about 5,300 total students in both 2018 and 2019, but now over 600 of them have left. Because districts can base their state funding on enrollment from either this year, last year, or the year before, these students will continue to be funded even though they’ve left the district.

Where have they gone? We know that the homeschooling numbers in Missouri have increased dramatically in the last year and I suspect that explains many of the missing 600. Is it reasonable to suggest that these parents don’t need any financial support? At the state average funding of around $6,500 per student, nearly $4 million in state funding will go to these districts for students who aren’t enrolled. Meanwhile, the parents who have decided that their district couldn’t provide an acceptable education this year are left to figure out how to create one on their own dime.

It’s a convenient story that all rural parents love their local schools and have no need for school choice. It keeps all power in the hands of superintendents, school boards, and local teachers unions. But the facts suggest an inconvenient truth. Will legislators pay attention?