Do Kentucky Teachers Even Know Why They’re Protesting?

Kentucky public school teachers are right to be worried about their retirement benefits. According to the Kentucky Teacher Retirement System’s (KTRS) 2017 annual financial report, the fund was about $14 billion short of what it needs to pay the benefits already promised to working and retired teachers. According to the KTRS report, “Since fiscal year 2008, the state has not paid the full recommended annual employer contribution necessary to prefund the benefit requirements of members of the retirement system as determined by the actuary.” Further, “If contributions by the employer to the system in subsequent fiscal years are less than those required, the assets are expected to become insufficient to pay promised benefits.”

The words are complicated and confusing. But two years ago, Beau Barnes, a KTRS lawyer, summed it up this way, “It’s a 100 percent certainty that if we don’t do something very soon, this problem continues to get much, much worse very quickly.”

What this means is that, as in so many states, Kentucky’s teacher retirement plan is in a hole that is only getting deeper. It is time to stop digging, and it appears they’re trying to do so. If Governor Bevin signs SB 151, current and retired teachers will be guaranteed pension payments for every dollar that they have been promised, plus an annual cost-of-living adjustment of 1.5 percent. New teachers—only those hired for the 2019–20 school year and thereafter—will be placed in a hybrid, cash balance plan, similar to what just about everyone in the private sector has today. This will allow the state to deal with the debt the plan has accumulated without it growing.

So, why Kentucky teachers are walking out? Are they that concerned about the next year’s crop of new teachers? Or is it just that they don’t really understand the system, the seriousness of the problem, and how reform actually protects their benefits by finding a way out of the financial mess? We found a similar lack of understanding when we surveyed Missouri teachers about pensions. So, while the teacher’s unions are whipping teachers into a frenzy behind the false narrative of “they’re taking our pensions!” Kentucky parents have to scramble to make arrangements for their kids. 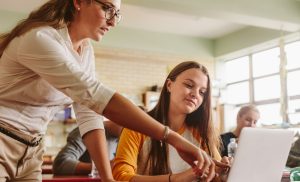