A summer gas tax “holiday” seems to be all the rage these days. Last week, the Missouri house approved a bill to rebate the $0.17/gallon Missouri gas tax consumer will pay throughout the summer. On the presidential campaign trail, both Senators Clinton and McCain have voiced their approval of a federal moratorium on summer gas taxes despite, as David pointed out yesterday, overwhelming opposition from economists of all stripes. In fact, more than 200 economists recently signed a petition against the gas tax break — including four Nobel laureates.

Politicians like scapegoats, and big oil companies are an easy target when oil futures trade at more than $120/barrel. But has the run-up in gas prices really made “Joe American” worse off? (Hat tip to Tim Iacono for this idea.)

During the past year, retail gasoline has increased from $2.80/gallon to approximately $3.60. An average American consumes approximately 500 gallons of gasoline per year. So let’s be conservative and assume that the entire purchase was at the higher price, resulting in a $400 higher gasoline bill this year (500 gallons * $0.80 = $400).

But the typical American is also heavily invested in energy stocks through mutual funds in their 401k accounts. A middle-class American family (in their 30s with household income between $40k?$80k) has about $90,000 in retirement accounts. On average, about 70 percent of these accounts are invested in broad U.S. equity indices, of which energy stocks compose about 13 percent. Energy stocks are up about 17 percent during the past year. So the increase in the average American’s wealth from high energy prices is about $1,392 ($90k * 0.7 * 0.13 * 0.17 = $1,392). That means that a typical American family is nearly $1,000 wealthier from the run-up in energy prices during the past year (in a very simplistic sense).

Of course, this ignores the several-trillion-dollar loss in home equity values most Americans have suffered lately, so it’s a small consolation. But it’s an interesting way of looking at the world. 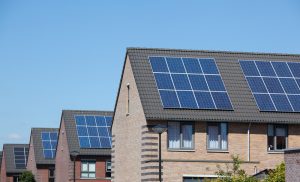 More on Moore’s “Planet of the Humans”
Connect With Us