Just How Expensive Is “Free” Tuition?

I have to give some serious credit to the Campaign for Free College Tuition. They are unapologetic advocates for making college tuition free, but rather than rely on some rosy projections about how much it might cost to make that a reality, they commissioned an impeccably credentialed and skeptical researcher to make a full accounting of what exactly free college would costs states.

The numbers he found were large. Very large.

If Missouri were to make all public 2-year and 4-year colleges free to in-state students, the total yearly price tag would come in at a staggering $808 million—on top of everything the state already spends. And if growth in college costs continues at its current rate, this number should only increase.

The paper also estimates the need for additional appropriations should the enrollment patterns of students switch as a result of this policy change. That is, students who might otherwise attend a private school in the state might decide to switch to a public school because tuition there would be free. If just 5% of each cohort switched from private to public, and thus got their entire tuition covered, Missouri would spend an additional $5.5 million per year. If 10% did, it jumps to an additional $11 million.

So what does roughly $815 million look like in the context of the state’s budget? Well the entire general revenue request for higher education from the Governor’s 2016 budget was only $913 million, so free college could essentially double that. The instructional budget of the whole University of Missouri system is only $650 million, so free tuition would cost substantially more than that as well. Absent massive federal subsidies, providing free college to Missouri students would require radical reallocation of state resources, resources currently spent in K-12 education, healthcare, infrastructure, and a host of other causes.

The Campaign for Free College Tuition deserves praise for their honest accounting, but the numbers their study produced makes it hard to support their goals. A more fruitful path to expanding college opportunity would be to work to drive down the cost of college and make it more affordable for more students.  Stay tuned for some research we have cooking on this very topic! 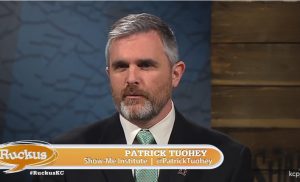 Lawmakers Need to Start Budgeting Like Adults, Not Teenagers
Connect With Us