The National Education Association (NEA) made some big news at its annual meeting last week, endorsing the teaching of critical race theory (CRT) to K-12 students and calling on members to “fight back” against those that oppose it. The union also committed to providing:

an already-created, in-depth, study that critiques empire, white supremacy, anti-Blackness, anti-Indigeneity, racism, patriarchy, cisheteropatriarchy, capitalism, ableism, anthropocentrism, and other forms of power and oppression at the intersections of our society, and that we oppose attempts to ban critical race theory and/or The 1619 Project. [Emphasis mine]

I’ll let readers unpack for themselves what all those other terms mean. But not only do we know that CRT is already in K-12 classrooms around the country and here in Missouri, but its instruction is now officially supported by one of the biggest teachers unions in the United States.

Is your school in an “NEA district”? Maybe.

The Missouri NEA’s website offers the most current list of the group’s 300 or so affiliates in Missouri, but thanks to our Show-Me CBAs Project, we also know that there are a lot of Missouri districts that had formalized and active working relationships with the Missouri NEA in recent years. That list includes: 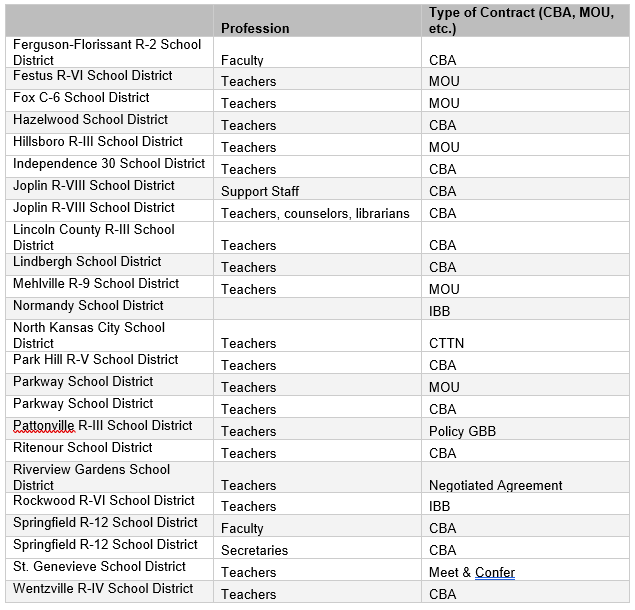 You can find our full CBA report here.

It might not be coincidental, then, that several of the districts on these lists have been less than open about what they’re teaching kids in response to our Show-Me Curricula inquiries. Taking the cake so far is Springfield, whose public schools want nearly $2,000 to produce documents relating to what they’re teaching their kids. If the district’s partners in the NEA are any indication, I can imagine why they might be reluctant to hand over these public documents.

The NEA’s endorsement of CRT reaffirms how important it is for Missouri schools to be honest with parents and the public about what’s being taught in their classrooms. Hopefully, those districts currently resisting our transparency requests will relent in their effort to evade what’s required of them under the Sunshine Law. We certainly won’t relent in pursuing those documents.