A decade ago business boomed as the Crestwood shopping center annually brought in more than $1 million in sales tax revenue for the city.  Today the mall is closed, and the city says that without a property tax increase it will have to lay off staff, affecting public safety response times and infrastructure maintenance.   Before authorizing a tax hike, voters should consider the totality of Crestwood’s tax policy.

Earlier this year Crestwood officials granted the owner of the former Crestwood Plaza $25 million in tax incentives to redevelop the 47-acre site into a mixed-use project (meaning office, retail, and residential space).  Incentives such as these can hollow out a city’s tax base in cases where development would have taken place anyway, and research shows this is often the case.  If the city is in a hole, why is it diverting its tax revenue to a developer?

This is exactly what Lindbergh School District officials are wondering.  The district’s superintendent has spoken out against the use of public subsidies for the development, because the tax incentives awarded to the Crestwood shopping center project will result in the diversion of public dollars away from the schools.

Raising the city’s property tax could also have adverse effects down the road.  While not the only consideration, taxes are a variable taken into account when someone is deciding where to live. Crestwood’s residential property tax rate of $0.25 per $100 assessed value is fairly attractive compared to other Saint Louis County municipalities.  This appears to be a competitive advantage for attracting residents that Crestwood would do well to maintain. 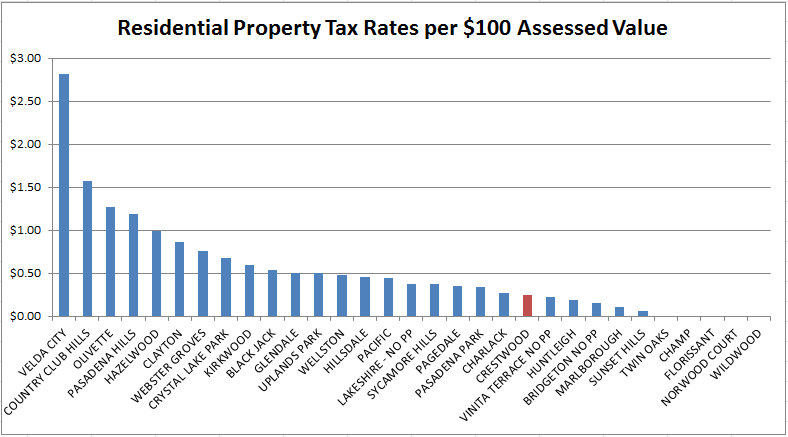 When residents of Crestwood are asked to what degree they would support a tax increase, perhaps they should ask if giving away millions of dollars to a developer—money that might otherwise be spent on fundamental city services—is the wisest use of the city’s funds.