Part 7: Does Kansas City Have an Affordable Housing Problem?

(You can read part one, part two, part three, part four, part five, and part six in this series here.)

In the last post in this series, I talked about how to estimate potential housing demand. Now it’s time to talk about the supply. Since the majority of households earning below the area median income (AMI) are renters (as the graph in the last post showed), we can use census data to determine the number of units rented in Kansas City and how much they cost, which should give us a pretty good estimate of the supply of rental housing.

As the figure below shows, there weren’t many rental units available for less than $500/month at the time the survey was conducted, but there are more than 123,000 available between $500–999 per month. Moreover, the data below are not broken down by the number of bedrooms. Undertaking an even more granular analysis of the balance between housing demand and supply through a decomposition by family and unit size is left for future analysis. 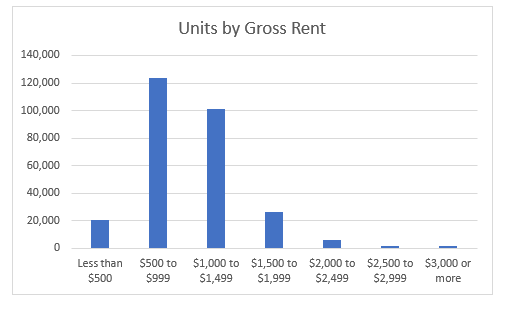 With that in mind, we can combine the data we’ve put together in the last two posts to strictly compare the estimates of affordable housing supply with demand. This allows us to establish a potential surplus or shortage for any income group. Using the table below, we can see for each income bracket the supply of affordable housing. Then, by subtracting the demand for units from the supply, we can determine whether there’s a surplus or shortage of housing at the 30%-of-income affordability threshold for households at each income level.

The results in the table above are similar to what I referenced in part 5 of this series about a supply and demand analysis of St. Louis City and County contained in a report commissioned by the Community Builders Network of Metro St. Louis for the Affordable Housing Trust Fund Coalition. It’s not that Kansas City clearly lacks rental housing, but it may lack sufficiently affordable rental housing for the city’s poorest residents. And when “affordable” in this instance means rents lower than $580/month for a family of three, it’s somewhat understandable that such places could be hard to come by.

It is important to remember that these estimates for the potential housing supply and demand in Kansas City are only as good as the assumptions made to create them. In the next post, I’ll dive a little deeper into how different examinations of the same data can lead to different results for what should be done in Kansas City.