Since 2008, Missourians’ average retail electricity prices have increased the fourth most in the country. The average retail price of electricity jumped 17 percent in our state over this time period after taking inflation into account.

Missourians have little recourse to deal with these rising costs. Missouri’s retail electric markets are monopolized, meaning that each Missourian only has one possible electric service provider.

But it doesn’t have to be this way. As I have written previously, thirteen states and the District of Columbia allow customers to choose between competing electric service providers. Looking at the time since competitive markets matured in 2008, the results have been quite encouraging, as shown in the graph below. 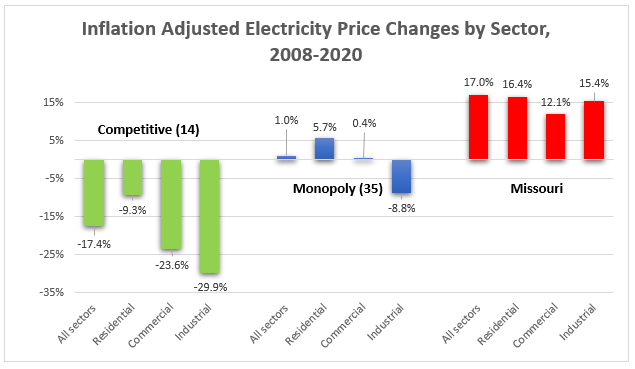 Across every sector, competitive states are outperforming monopolized states—and especially Missouri—when it comes to lowering prices. Competition has helped make the electric service industry in those states more efficient and has passed on savings to customers. If lawmakers want to reduce the cost of living for Missourians while enhancing their economic freedom, they ought to consider embracing retail electric competition.

Analyst
More about this author >