Governments across the country have been given the responsibility of spending trillions of federal stimulus dollars. In his book “Free to Choose,” Milton Friedman outlined the four ways to spend money, differentiated by whose money is spent and on whom money is spent. Unfortunately, this theory doesn’t bode well for spending stimulus dollars.

The image below outlines the four spending options and how they all change behavior. 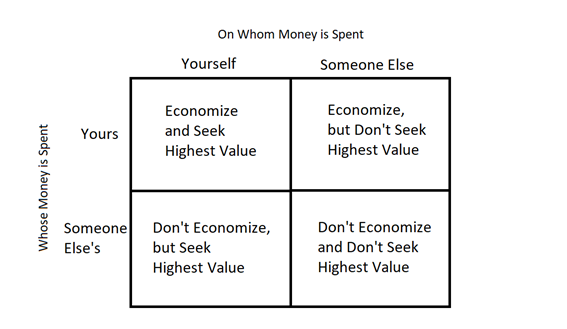 Spending your money on yourself is when you economize (reduce expenses) and seek the highest value, as you are both the one losing the money and receiving the product. The exact opposite is spending someone else’s money on someone else. You don’t economize or seek high value because it is neither your money nor do you receive the product; you have very little invested in the decision.

This theory doesn’t paint a promising picture for spending the billions of stimulus dollars that Missouri received. Taxpayers do not want billions of dollars being spent in a way that is inefficient and wasteful. Lawmakers will need to be mindful of this incentive structure when deciding both what to spend these one-time funds on and whether to spend some of these funds at all.