Why Did Saint Louis Get Rid of Its Streetcars?

In Saint Louis, and in many cities across the county, there is a push to bring back streetcars. And in cities like Saint Louis, which once had an extensive streetcar system, people often ask why the city got rid of them in the first place. After all, many people think that streetcars are quaint and give urban environments a charm that attracts residents and businesses. Some think their replacement with buses was shortsighted; others even push the idea of a GM-led conspiracy.

In reality, streetcars went away virtually everywhere because of cost, and what people now consider quaint was once seen as outdated technology. Streetcar ridership waned in the early and mid-20th century, as they were outcompeted by buses and private cars. When public transportation became publicly owned, policymakers switched to buses, which were seen as cheaper, faster, and more flexible. Cities where streetcars persisted tended to be those with long tunnel stretches, where diesel buses would have created ventilation issues.

Returning to the question of cost, it’s important to remember that streetcars require their own dedicated infrastructure, while buses can share roads with cars, freight, and bicyclists. People complain about highway subsidies, but from the transit planner’s point of view the local streets are going to be there whether they decide to run a bus route or not. With a streetcar, the rails need to be built, maintained, and replaced on a regular basis.

While Saint Louis is building a 2.2-mile vintage streetcar line and considering a modern seven-mile route from downtown to the Central West End, these efforts are more expensive showpieces than a return of streetcar transit. For instance, in 1902, Saint Louis City, Saint Louis County, and Saint Clair County had a combined 560 miles of streetcar lines. That’s a long way from nine miles. Even in cities like Portland, which have spent serious amounts of money to bring back streetcars, total mileage is still less than 20.

Nor could Saint Louis afford to bring such a system back. Modern streetcar lines now require more than $50 million in capital costs per mile. Even assuming some economies of scale and track sharing, building 560 miles of lines would cost billions, possibly tens of billions. If the region went for a less expensive vintage streetcar system (like the Loop Trolley), the cost could still be almost $10 billion to build. For comparison, MetroBus, which runs a system roughly three times as extensive as that 1902 streetcar system, only spent $333 million on capital expenses between 1992 and 2013. 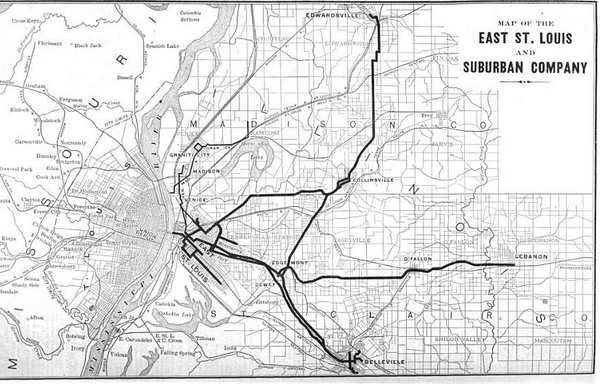