On Ruckus last week we discussed the city’s debt and its profligate spending on the Power & Light District downtown. In the segment, I asserted that ten years ago, “Kansas City fell all over itself to try to build an entertainment district. It hasn’t created any new jobs; it hasn’t created any new businesses.” How can that be—isn’t it evident that downtown has seen a rebirth?

As I’ve written before, most of these taxpayer subsidies result only in economic diversion. They don’t create anything new; at best they just move development to different areas. The H&R Block headquarters for which taxpayers paid didn’t create the new jobs that were promised; it merely consolidated jobs from across the area to one place. Likewise, as the chart below shows, the Power & Light District didn’t create new jobs or businesses, but instead simply relocated them from elsewhere. 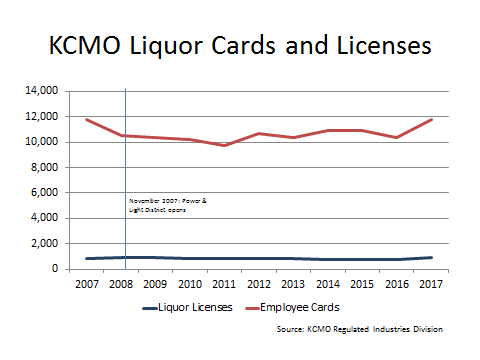 The number of bars and restaurants (and their accompanying jobs) remained flat in Kansas City for years after the Power & Light District opened. If the Power & Light District had been the success that city leaders claimed, you’d have seen an uptick in employee liquor cards and licenses. But citywide, the numbers were flat at best. This means that any new jobs and businesses downtown merely came at the cost of jobs and businesses elsewhere in the city. Nothing new was created. Only now, as the economy improves, are those numbers going up.

Focusing on reviving downtown Kansas City might be a worthy goal. As I wrote last year,

The rest of Kansas City has needs, including basic infrastructure and greater police presence. Focusing on downtown hasn’t provided any net benefit, and it has cost us dearly.