Months ago, I wrote about the new St. Louis City cap on delivery fees that food delivery services can charge restaurants in the city. I pointed out the clear government overreach and interference in the market and how “this bill could ultimately hurt consumers, delivery drivers, and restaurants in St. Louis City.”

Well, the cap was enacted and consumers can already see the difference it’s making. I was considering an order on DoorDash and I noticed a new fee included during checkout. As shown below, I saw a “Regulatory Response Fee” included with the other taxes and fees. 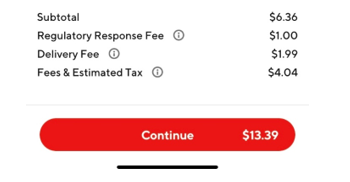 When I clicked on the symbol for more information, the below image appeared: 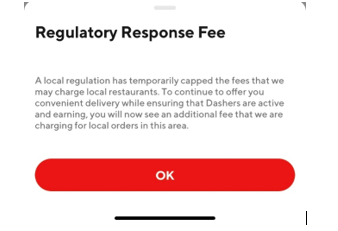 And there it is. The new fee on customers in St. Louis City is a direct response to the regulatory cap that the St. Louis Board of Aldermen passed.

Previous fees were mutually agreed upon in the market and neither party was forced to partner with the other. Consumers may have paid a portion of the higher fees before the cap, but they are certainly paying this fee now. This $1 fee may not be budget-breaking, but consumers are only subject to it because lawmakers interfered. Lawmakers should let the market work to avoid unintended though predictable consequences.