Can We Have Meaningful Dialogue on Pension Reform?

I recently published an op-ed about a curious incident that occurred in September. Out of nowhere, superintendents and educators throughout the state began sounding the alarm about a survey I was allegedly conducting with Mike McShane. The problem, as I wrote in the op-ed, was that the survey was conducted five years ago.

When you write an op-ed, you are often constrained by word count. Newspapers have limited space and often like guest editorials under 600 or 700 words. This means I couldn’t say all the things I wanted to say. In my op-ed, I focused on critical thinking and media literacy. Here, I would like to talk about civility and meaningful dialogue.

I have been writing for the Show-Me Institute for nearly a decade. I began writing about pensions early on. In all that time, I have been invited to debate or discuss ideas with Missouri’s educators exactly zero times. Instead, educators and the leadership of their organizations have attempted to shut down debate. They do this overtly, as in when they send out legislative alerts or emails from superintendents warning teachers to not take my survey, and they do this covertly with the language they use.

Instead of having a debate on the issues of pension reform or even school choice, they suggest I and the Show-Me Institute are enemies who want to “dismantle” the pension system and that we are “privatizers” who want to destroy public education. It’s smart really if the goal is to stifle debate. When you set someone up as your enemy who is out to destroy you, you have little incentive to engage them in a meaningful dialogue.

Dismissing our rivals by name calling and refusing to engage, however, is terrible if you believe the best way to the truth is by discussing and debating ideas.

Like it or not, there are some important policy discussions that we should wrestle with when it comes to Missouri’s teacher pension systems. What should we do about the three separate systems that place St. Louis and Kansas City at a competitive disadvantage? Should we be concerned about the large unfunded liabilities of these systems? Should we care that the systems are designed in a way that favors wealthy school districts and increases inequity?

We cannot have those conversations when one side simply wants to shut down the discussion.

I believe we should engage with the best arguments of our opponents. And I am more than willing to engage with any group of educators who would like to seriously discuss these issues. 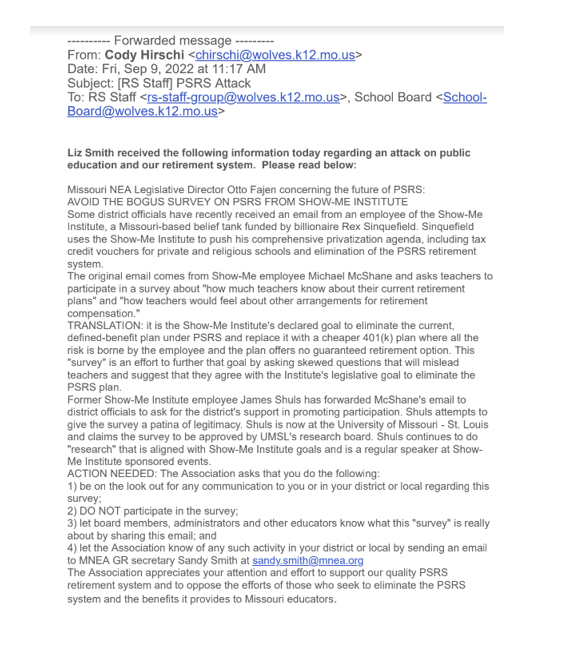