Missouri’s next budget will include Medicaid expansion, and the price tag is going to be enormous. Recently, the governor warned during his State of the State address that expanding the program as approved by voters this past August will cost state taxpayers “hundreds of millions” of dollars. In reality, the cost of Missouri’s growing Medicaid program will be much higher.

Last week, as the state legislature began working on next year’s budget, the topic of paying for Medicaid took center stage. As I’ve outlined repeatedly, the cost of Medicaid in Missouri has been growing for years, but next year’s estimates indicate the program’s spending will go to another level.

Here is a look at the last four years of Missouri’s Medicaid spending with the governor’s newly released estimates included:

As you can see, the program is expected to be almost 36 percent more expensive than it was just three years ago. If you look at state general revenue (GR) spending (where our state income and sales taxes go), the story isn’t much better. The general revenue cost of the program is estimated to be more than $520 million higher than it was in 2019 (a nearly 24 percent increase), which is far greater than state tax revenues have grown over that same period. See the table below: 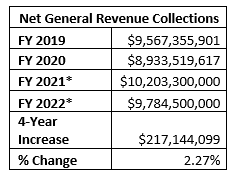 This is important because GR spending is what many other state programs such as K–12 education rely on. If the revenue and expenditure estimates for next year are accurate, it will mean that Medicaid consumed all the state’s revenue growth from the last 4 years AND siphoned more than $300 million from other state programs.

As seen in the table above, revenue is projected to only grow by about $217 million between 2019 and 2022; meanwhile, Medicaid spending is projected to grow by $520 over the same period. The table below shows the additional projected cost of Medicaid expansion, which accounts for a significant portion of the program’s expected cost growth and includes both state and federal spending: 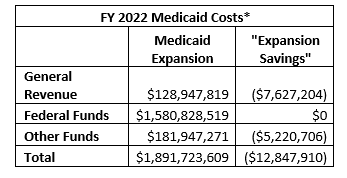 In the first year alone, while expansion enrollment is still ramping up, the policy will cost upwards of $2 billion in total. Before voters approved the initiative, many supporters argued that expansion would be “costless” or “pay for itself,” but these claims never held water. In fact, the savings that we were told would cover the cost of expansion are expected to amount to less than $13 million, which is less than 1 percent of the program’s estimated cost in the first year.

As Missouri’s legislature prepares next year’s budget in the coming months, taking concrete steps to rein in Medicaid spending has never been more important. With the cost of Medicaid expansion looming and the revenue uncertainty of the COVID-19 pandemic ongoing, state taxpayers can no longer afford the price of inaction.