I recently wrote about Chesterfield’s plans to hike taxes during a pandemic. It looks like more tax increases could be coming, but this time in the form of a sales tax. A plan released last week to develop $84 million worth of projects on Delmar Boulevard also includes a request for a special taxing district that would raise sales taxes in the area. More special taxing districts and higher sales tax is a bad idea in general, but it’s an especially bad idea during a pandemic.

Since moving to Missouri, I’ve (reluctantly) become accustomed to high sales tax rates that vary from city to city, and even from street to street. Special taxing districts, political subdivisions that can impose taxes, are often to blame for these high sales tax rates, as they add additional taxes on top of state, county, and city taxes. As we work through this economic downturn, many will feel the burden of these high sales taxes.

The chart below shows the highest general sales tax rates in select cities according to Missouri’s Department of Revenue. As you can see, general sales taxes can get pretty high all over the state, peaking at 11.679% in several areas of St. Louis City (specific sales taxes, such as hotel room rates, can get even higher). Even in places with smaller populations like Joplin, there are enough special taxing districts to push sales tax rates up to nearly double digits. 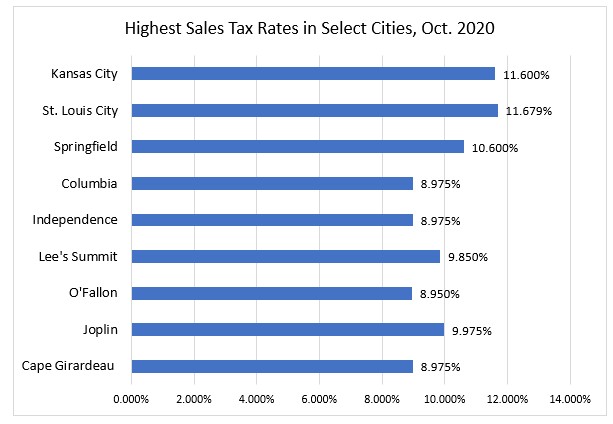