How Well Are Rural Students Performing?

Without looking up the Show-Me Institute’s new paper on reforming rural schools, would you know off the top of your head how many Missouri students attend them?  Twenty-five percent? Thirty five percent?

In reality, 44.9 percent of all Missouri students—some 387,704 students in total—attend rural schools.

Rural schools often get overlooked in discussions of education reform, with city and suburban schools typically taking center stage. But it would be difficult to have a serious conversation about improving Missouri’s education system without recognizing the role of rural schools. Which leads us to the question: How well are rural students in Missouri performing? Mike McShane broke down their performance in a series of figures that tell the story.

Figure 2 from the paper outlines Missouri MAP test results for 4th- and 8th-graders by geographic location. The MAP is a state standardized test administered to students in 3rd through 8th grade and then again in 10th grade. In the areas of math and English language arts, 4th-graders in the suburbs scored the highest followed by children in towns. However, 8th-graders in rural areas scored second-highest only to students in the suburbs. Unfortunately, city schools scored the lowest in every category. 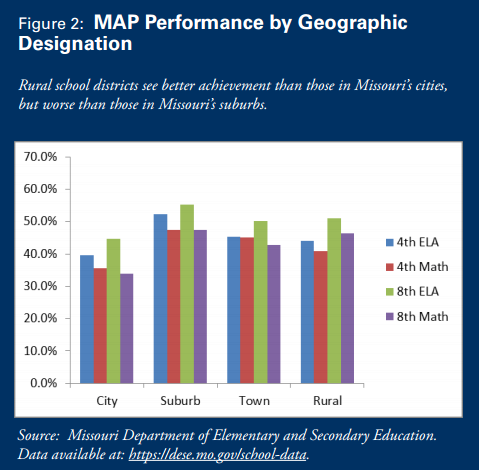 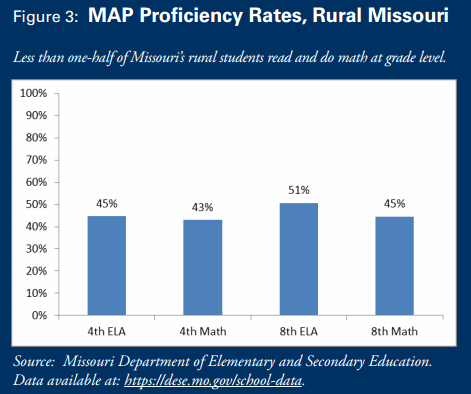 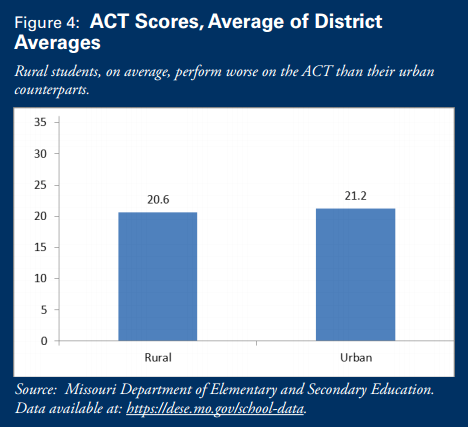 Based on these results, we can see that rural schools have room to improve. Implementing things like course access programs or education savings accounts would help each family design the education program that best meets their child’s needs. Putting families in control is the first step toward giving rural schools the help they need to rise to the top.

The Missouri School Rankings Project
Connect With Us