The economic recovery from the COVID-19 pandemic has been much more rapid and robust than people initially predicted. It’s possible that memories of the slow rebound from the Great Recession created pessimistic expectations. However, despite the faster-than-expected rebound in 2020, employers are reportedly experiencing hiring difficulties, which may slow the return to economic prosperity. Evidence from the aftermath of the Great Recession suggests one risk factor that may delay jobs recovery: generous unemployment benefit extensions. This blog post will be the first in a series that discusses the unemployment insurance program, its economic effects, and its implications for the current recovery.

Though still higher than the national unemployment rate of 3.5 percent from January 2020, we’ve recovered much more quickly than we did from the Great Recession.  It took nearly five years for the unemployment rate to fall from its peak of 10 percent in October 2009 to below 6 percent. As the image below shows, unemployment reached an even higher peak during the pandemic but has still managed to fall to 6 percent in less than a year’s time. 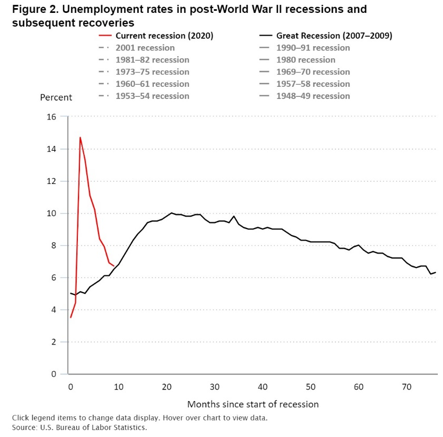 Perhaps the historical fiscal relief packages passed in 2020 help explain the more robust recovery. The CARES Act was passed in March 2020 to support the economy in a variety of ways through a period of widespread lockdowns. Included in the CARES Act was enhanced unemployment insurance to help those who had lost their jobs at a time when it was difficult to find jobs.

However, with the economy re-opening, job postings on the rise, and accelerating vaccinations signaling a potential end to the pandemic, it is worth re-examining the evidence on the effects of unemployment benefits during downturns and recoveries. Are the benefit extensions helping the recovery by sustaining consumer spending, or are they slowing the recovery by discouraging people from searching for jobs by paying them generously not to work? This will be discussed in future blog posts.