Show Me the Money

As my colleague recently wrote, the Missouri Department of Transportation (MoDOT) appears to be making do with the money they have to keep Missouri’s roads in respectable shape, but not bridges.

While it is good news that MoDOT appears to use available funds efficiently, that does not mean it has enough money to cover all needed infrastructure repairs in Missouri.

MoDOT has been in the midst of a years-long funding strain (pages 33-38). Between 2000-2010, MoDOT relied heavily on federal reimbursements and issued billions of dollars of bonds to fund its projects. Both sources, however, began to dwindle in 2011. While Missouri has the seventh-largest highway system in the country, it has the second-lowest fuel tax. Multiplying the problem, a decrease in money raised in Missouri for transportation means a decrease in matching federal funding.

Federal money makes up 42% of MoDOT’s budget. The fuel tax is the second largest component at 23%. The gasoline tax was set at $0.17 in 1996 and is still $0.17, meaning the value of that money has dropped significantly due to inflation. Relative to the size of the highway system, the revenue Missouri brings in per mile is less than a quarter of the national average. Simultaneously, construction and upkeep-related expenses have significantly increased due to lower productivity and higher regulatory barriers, as well as asphalt, crushed stone, and paving mixtures being significantly more expensive than just a decade ago. Having less money to spend on more expensive projects has made upkeep more difficult.

The amount of money MoDOT spent fell in 2011 and has not kept up with inflation, as you can see in the graph below: 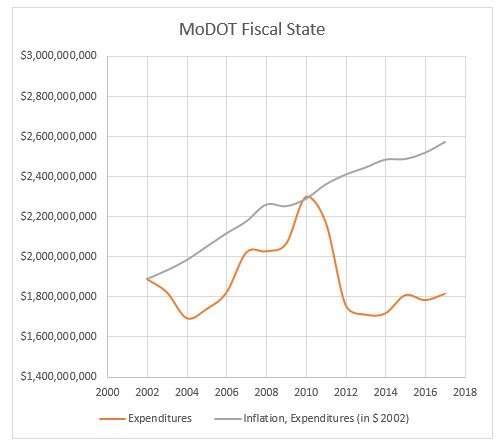 The surge in expenditures in 2010 coincides with the passage of the American Reinvestment and Recovery Act (ARRA) in 2009, commonly known as the federal stimulus package. The ARRA added $400 million to MoDOT’s budget, which dissipated just as quickly due to the large number of projects for which it was needed. In 2014, ARRA funds totaled less than 1% of MoDOT’s revenues dedicated to the highway system (page 8).

Relying on large and sudden injections of federal money is not a viable funding solution, and any bonds that are issued face their day of repayment.

To raise the revenue needed to maintain our roads and bridges, a clear solution presents itself – increased use of user fees. The concept is simple and works in everyday life. Those who use a service pay for that service in return.

Numerous other states employ user fees in the form of more effective gasoline taxes and tolling, significantly boosting transportation revenue in a market-based way. Legal hurdles remain, though. Tolling interstates in Missouri would require federal approval, as Missouri turned down the opportunity to toll I-70, and questions remain regarding constitutional limits on where the funding to construct a turnpike authority can originate.

User fees may only be part of MoDOT’s solution, but they could increase its budget to meet current needs.

Analyst
More about this author >