Saint Louis Should Learn from MetroLink’s Disappointing Past

Mayor Slay is talking up plans for a billion-dollar-plus expansion of Saint Louis’s light rail system, the MetroLink. This means that the region’s residents will soon, in all likelihood, be asked whether they're willing to pay for it. In convincing Saint Louisans to vote yes, rail backers will (as they have in the past) promote the supposed benefits of light rail, including everything from getting people out of their cars to boosting urban development. But before residents buy into the claims of train enthusiasts, they should consider the disappointing performance of the existing MetroLink routes.

First, let’s analyze MetroLink’s effect on public transportation usage. It is true that people (including myself) use the MetroLink; the system handles an average of about 44,000 trips per day. However, MetroLink’s effect on total transit ridership has been modest. Despite the immense expenditures (around $3 billion) and multiple expansions, total bus and rail ridership today is lower than bus ridership alone was in 1991, three years before the MetroLink opened. Even worse, not all MetroLink expansions have even resulted in sustained higher MetroLink ridership. Take the case of latest expansion, from Forest Park to Shrewsbury, which opened in 2006. While the addition initially pushed rail ridership to new heights, ten years later total MetroLink ridership is lower than it was the year before the expansion opened. 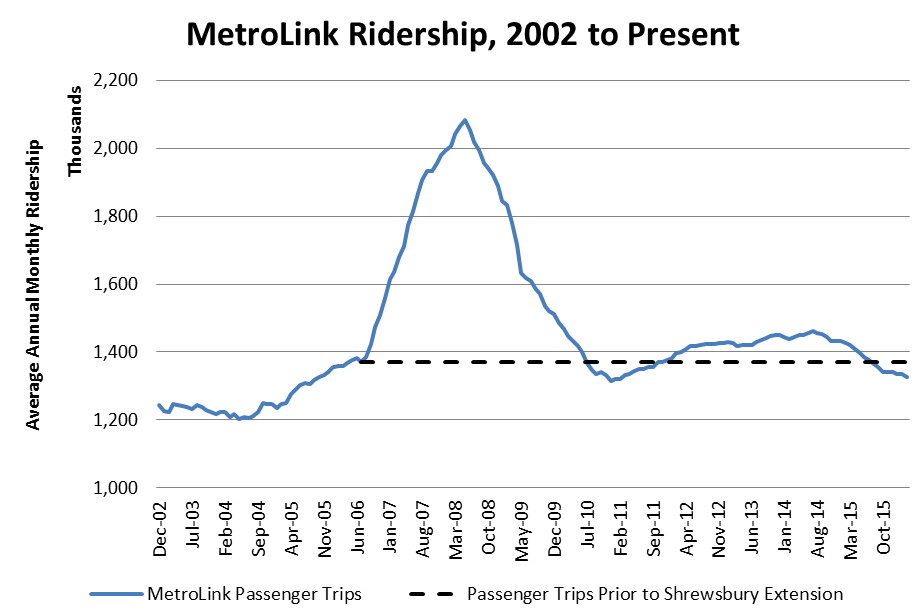 The increasing supply of light rail, along with flagging enthusiasm for its use, has meant that in terms of passengers, MetroLink now has the lowest rate of use it has ever had, with only 2.55 riders per vehicle revenue mile.

Next let’s evaluate the MetroLink’s impact on development in Saint Louis. Consider the expectations of MetroLink’s proponents when the initial line opened in 1994. They hoped rail would generate urban renewal, with specific hopes that it would save Saint Louis Centre and bring life (and even a golf course) to East Saint Louis. Far from rejuvenating areas that were down on their luck, the MetroLink failed to prevent decline in areas of its route that appeared on the ascendency in 1994, like Union Station and Laclede’s Landing. Some areas near MetroLink stations have done well, like the Central West End or the Loop, but in these places development seems to be happening near the MetroLink, not radiating from it. With few exceptions, MetroLink platforms remain areas of quiet repose, far from businesses, residences, and crowds. It’s ironic, given the claims of rail advocates, that the true success stories of urban renewal in Saint Louis City are places like Soulard, South Grand, the Grove, and now Cherokee Street, located far away from any MetroLink station.

With regard to increasing transit usage in Saint Louis and spurring urban revitalization, the MetroLink has, to this point, been an expensive disappointment. There is no reason to think any MetroLink expansion will create different results. It’s time for the region to start looking for better, more cost-effective ways to achieve progress toward public transportation and development goals.