MetroLink Underperforms, but It Is Not Underdeveloped

The Post-Dispatch’s Tony Messenger claims that MetroLink, Saint Louis’s light rail system, is “underperforming and underdeveloped.” He’s half right. Today, MetroLink carries roughly as many passengers as it did in 2005, prior to the last expansion. In fact, all modes of transit underperform in Saint Louis. A lower percentage of Saint Louisans ride the entire rail and bus system today than rode the pre-MetroLink, bus-only system. Even some transit activists admit the system has been underperforming for years.

But is MetroLink underdeveloped? One way to answer that question is to ask whether the existing supply of light rail meets demand. Based on ridership trends, the existing supply of light rail may actually exceed demand. Ridership plummeted during and shortly after the recession in 2008 and has failed to pick back up even while economic conditions have improved in Saint Louis.

Another way of determining if MetroLink is underdeveloped is to compare it to other light rail systems. The table below lists light rail systems from across the country, and looks specifically at the length of each system, as well as the population and geographic size of the urbanized area (UZA) where the system is located. 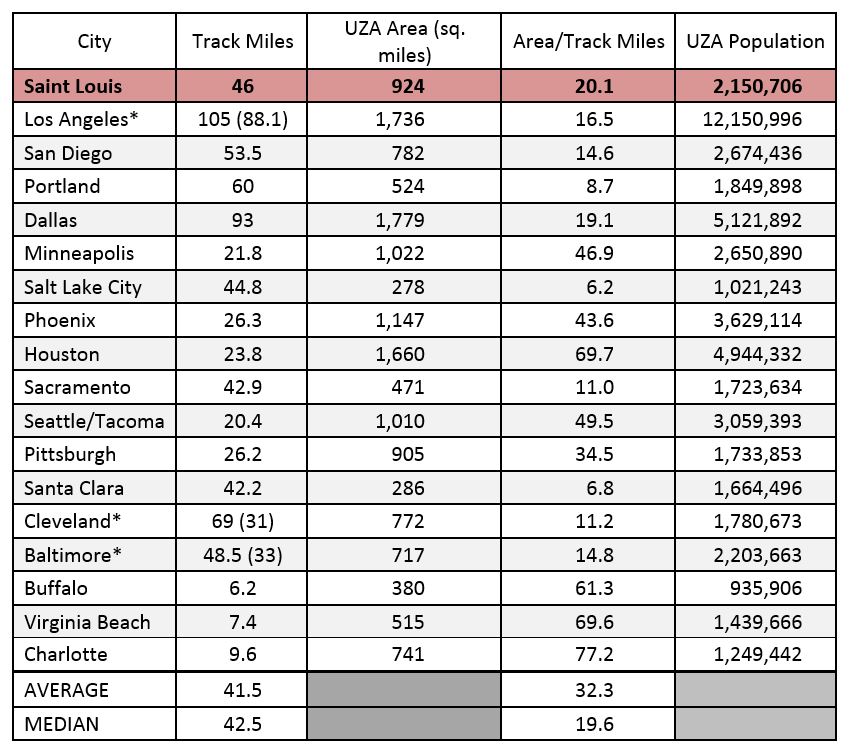 Note: Track miles are compared to UZA and not ‘Service Area’ (SA) because SA includes modes besides light rail (e.g., buses) and is a direct correlate of track miles. Thus, SA is simply a function of track miles, and not a measure of the metropolitan area a system serves.  See National Transit Database Glossary for more.
Source: Track miles from agency websites, and UZA data from National Transit Database.

Given this perspective, we can see that in terms of track miles, Saint Louis has a rather robust light rail system compared to other cities. While there is variation across systems, Saint Louis has more miles of track than the average and the median system. In fact, of these 18 systems, Saint Louis is the 7th-largest (and if we excluded systems with heavy rail, the 5th-largest). MetroLink is even larger than some heavy rail systems, such as Metrorail in Miami-Dade County (24.4 miles), and is just about as large as Atlanta’s system (47.6 miles).

However, what matters is not just the length of a system but also the length of a system relative to the size of the area it serves. To measure this, we divide the size of an area by the miles of track its system has—the figures in the fourth column. (For a more complete picture, I’ve also included population as the last column.) In short, the lower the number in the fourth column, the more miles of track per square mile of land, and so, the more developed a system is. By this measure, Saint Louis has one of the more developed systems in the country and compares well to many cities, with a system that is far more developed than the average. Saint Louis even compares favorably to Los Angeles!

Based on this analysis, Saint Louis’s light rail system does not appear underdeveloped. It may even be overdeveloped (or, perhaps, it developed too quickly or along poorly chosen routes). Before pushing for another expensive MetroLink extension, shouldn’t officials ask if we already have more than we need (and can afford)?