Is the Streetcar a Development Magnet?

Those who have followed the expansion of streetcars in Kansas City and across the country will know that the primary argument for these “transportation” systems is, ironically, not transportation at all, but the idea that (for some nebulous reason) streetcars attract development. And streetcar proponents are never short of anecdotal evidence for this claim, from the oft-cited case of the Pearl District in Portland to business owners in Kansas City who attest to the importance of the streetcar in their decision making. However, when we examine the aggregate data in Kansas City, the case for streetcar-oriented development seems very weak.

In making the case for expanding the streetcar, Kansas City officials have claimed that the streetcar (despite the fact that it only recently opened) has spurred development within the rail’s transportation development district (TDD). But the data on the market value of property within the TDD tell a different story. In fact, as the chart below shows, property values within the streetcar’s TDD follow largely the same trajectory as property values did in the county as a whole. According to data provided by Jackson County, market values grew in the early 2000s, fell during the recession, and began rising again in 2014. While the market value of property within the TDD has grown faster than values in Jackson County as a whole from 2000 to 2015, that growth occurred before the TDD’s creation, and is mainly due to the construction of the Power and Light District (which opened in 2007).

If we simply look at market values after the streetcar’s TDD was finalized in 2012, Jackson County as a whole performed better than the TDD. This directly contradicts the idea that the Kansas City Streetcar is boosting development downtown: 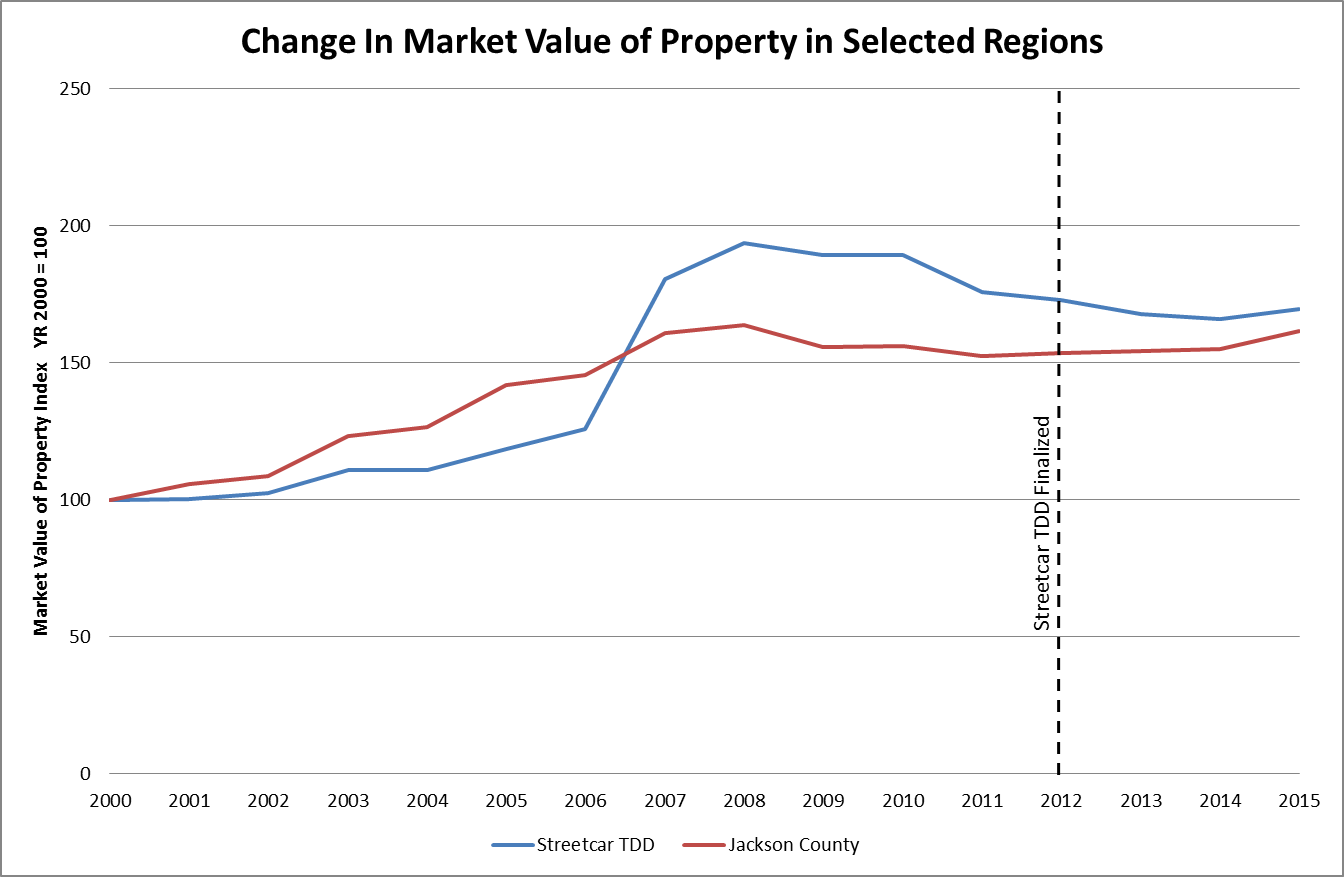 So why the disconnect between city hall’s streetcar rhetoric and the actual property data? Findings from the latest report from the Federal Transit Administration on streetcar development may shed some light on the situation:

Almost all [civic] representatives interviewed believed that streetcars positively affected the built environment, particularly in attracting new development or enhancing revitalization, although the degree of impact varies. Few systems, however, reported the types of ancillary changes in the built environment, such as reduced parking garage construction, increased pedestrian or bike lane investments, or explicit parking reductions that often are associated with light rail systems. Few, if any, streetcar system operators seek information on their impact on economic activity, although most interviewed consider economic-related questions to be vital and desire further research on this topic. [emphasis added]

Put another way, never let the truth get in the way of a good story.