When considering investment in transportation infrastructure, be it road, rail, or river, it is important to think about what type of infrastructure people will actually use. In Missouri and around the country, many planners have a “build it and they will come” mentality, essentially hoping that increased spending on planners’ preferred options (read: public transportation) will result in a transformation of habits. There already is a narrative that people are abandoning their cars for public transit, if we will let them. Saint Louis is spending money like that is the case, as public transit will receive around half of total federally aided transportation investment in the near future. However, the latest Census Bureau data provide little evidence that heavy investment in public transportation is having any effect at all on Missouri’s commuting habits.

If we consider what the numbers in terms of long-term trends, our writing from last year on this subject remain relevant:

Transit’s share of commutes in Missouri and its major cities has slowly decreased over the last few decades; a lower percentage use transit now than in 1990. Taking 2000 as our baseline year, the nadir of public transportation use in the United States as a whole, 1.49 percent of Missourians used transit for their commutes. After 13 years and well over a billion dollars of investments, transit’s share of commuters has remained essentially flat.

Nothing has happened to refute those observations. In fact, from 2013 to 2014 transit commuters as a percentage of all commuters decreased in Saint Louis City, Saint Louis County, Jackson County, and Clay County, as the chart below demonstrates: 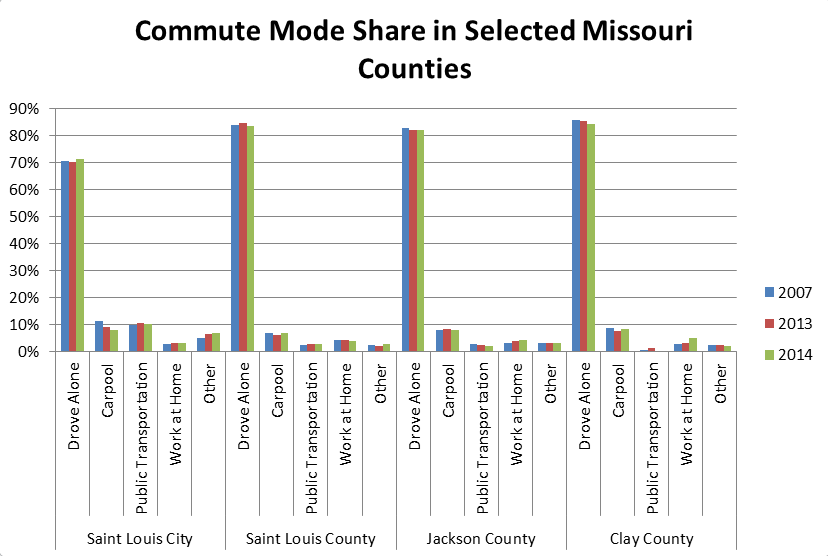 All of the recent changes have been small and may be within the margin of error. This means we cannot say that transit is definitely drawing a lower percentage of riders than they did last year. But we can say that the Census Bureau’s 2014 data, much like data from previous years, show no evidence of either a rapid rise in the preference for transit or a rapid decrease in preference for driving in Missouri’s largest cities.