School District Spending on Drinks, Among Other Things

I was intrigued when I saw this headline on Combest: “Lawmaker seeks to cut alcohol tab for school staffers.” Are education officials given some kind of allotment to spend on alcohol, which is being cut? No, but it turns out that at least one district has a problem with employees buying alcohol on the taxpayers’ dime:

The audit, available on the district Web site, flags $4,513 in confirmed alcoholic beverage purchases, including 14 pitchers of beer charged in one evening and as many as 46 alcoholic beverages split between two administrators on one other occasion.

And, in response, a state representative wants Missouri law to forbid the practice.

I’m sympathetic to this attempt to curb egregious spending, but I don’t think it will even make a ripple in the ocean of district wastefulness. The same audit revealed unwarranted purchases of items like sunglasses and flowers. We can’t write a separate law for each of these things: “No buying sunglasses … no buying this … no buying that …”

And if the state gives districts more incentive to conserve — for example, less money to begin with, or the threat of competition — there wouldn’t be a need for all those express prohibitions. 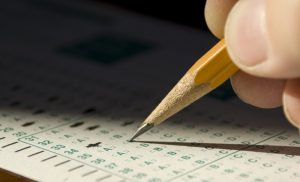