Making long-term projections can be tricky business, but figuring out where sales taxes across the state are going is straightforward: UP!

Every quarter, the Missouri Department of Revenue releases sales tax rates for all jurisdictions across the state. Because of the growing number of special taxing districts, such as community improvement districts (CID) and transportation development districts (TDD), sales tax rates have been shooting through the roof.

Data for the latest quarter (July-September) pegs Missouri’s average sales tax rate at 7.71%. While that doesn’t sound particularly high, it is important to note two things. First, at this time in 2017, the state average rate was 7.42%. For a statewide average, that is a significant jump for such a short period of time. 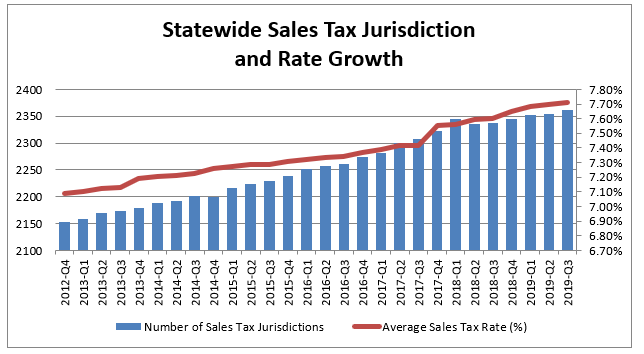 Second, these figures represent averages: many sales tax jurisdictions have rates higher than even 10% or 11%. For example, in Kansas City where the streetcar TDD overlaps with the Convention Hotel and Performing Arts CIDs, the total sales tax rate is 11.6%. In St. Louis the rates reach 11.68% in places like Ballpark Village and Washington Avenue. What the statewide average does a good job of tracking is the impact of additional special taxes in the hundreds of CIDs and TDDs across the state. If the addition of CIDs and TDDscauses such significant jumps in the tax climate of the state as a whole, that means these taxing districts are not just nickel and diming taxpayers—they are significantly changing Missouri’s tax climate.

In a recent paper, Patrick Tuohey and I discuss reforms to help curb the growth of special taxing districts. Some reforms have proposed a sales tax rate ceiling, and while they would help, they wouldn’t prevent taxpayer abuse in areas with lower sales tax rates than the proposed ceiling. This much is clear: the longer policymakers take to address the state’s out-of-control sales tax problem, the worse it is going to be. The time to act is now.