The Costs of Subsidies

We’ve written for years about the costs of development subsidies. Both how they hollow out the tax base and rob the city and schools of funds necessary for basic services. We pointed out that the recent levy increase for the Mid-Continent Library system was in fact a TIF tax.

Now comes a story about the real costs of subsidies to the Walmart in Raytown. According to The Kansas City Star,

In a city of about 10 square miles officers made more than 500 arrests last year at the Walmart store at 10300 E. U.S. 350. The store is the scene of about 30 percent of Raytown’s reported serious crimes.

Meanwhile, Walmart does not contribute taxes for police services. The TIF deal that built the store a decade ago diverts about $300,000 in tax dollars away from public safety every year.

There is no such thing as a free lunch, and politicians who think there is no cost for diverting tax revenue to developers should think again. Walmart often makes for a convenient bad guy, but this same story is being played out with many different businesses. Kansas City, Raytown, and all of Missouri are bearing the burden of these sweetheart deals. 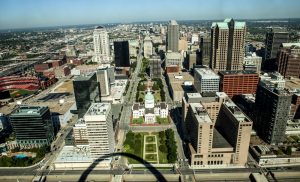