City leaders are still pointing to Kansas City’s downtown as an economic development success story. Taxpayers lose millions each year in subsidies for corporate headquarters, luxury apartment buildings, entertainment districts, and other projects. But is all of this spending working?

The research, if you care about research, says the spending is wasteful. Previous studies in Saint Louis and Kansas City say the same thing. And studies of other cities like Chicago and Indiana, and of the country as a whole, likewise cast doubt on the value of these development subsidies.

As we have written previously, the H&R Block headquarters building downtown, one of the first in the downtown spending spree of the Mayor Barnes administration, has failed to create jobs. At best, the company merely moved jobs that existed from elsewhere in Kansas City to this new location; no new jobs were created.

And here is perhaps the most damning evidence: despite all the spending, the economic growth of Kansas City due to downtown subsidies is a myth. We all know that the Power & Light District is the result of taxpayer subsidies—that is undeniable. Where before downtown was decrepit and abandoned, now it appears new and vibrant. But has any new economic development taken place? Has society or the average Kansas City family grown more prosperous because of these subsidies?

According to the Regulated Industries Division of Kansas City, Missouri, the number of liquor licenses (a gauge of how many restaurants and bars are operating) and employee health cards (a proxy for the number of people employed at bars and in food service) has remained flat since before subsidies were awarded. So while there may be more economic activity in the downtown area, citywide there has been no growth. Our subsidies haven’t created anything—they’ve just diverted activity from elsewhere in the city to downtown. 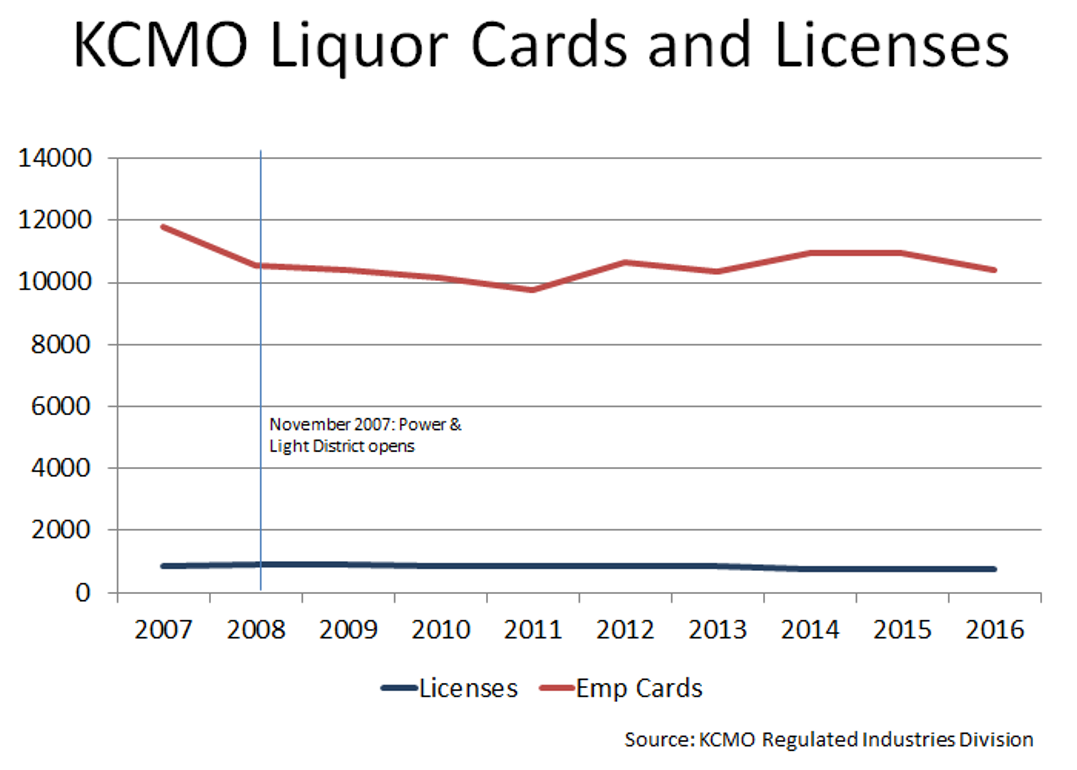 This shouldn’t come as a surprise. Imagine a new shopping center is built right near your home. There are a few stores and restaurants you’ve never been to, as well as a few outlets familiar to you. If you shop at this new location, you won’t continue to spend the same amount at the previous locations. The new stores haven’t caused you to spend more, they just cause you to spend differently. Yet the politicians in your neighborhood point to the new buildings as evidence of economic growth.

In the smaller incorporated cities in Johnson County, Kansas, this tactic might actually work at a very local level. A store that was generating sales tax income for Prairie Village could be lured to Shawnee with subsidies. That might be a win for Shawnee, but regionally it’s a wash, if not a total waste of public capital. (Writ large, this is the story with the Kansas-Missouri border war—lots of subsidies spent by both side with no real regional growth.) But in a large metropolitan area like Kansas City, there is no benefit. Citywide, there has been no growth in the number of bars, liquor stores or waiters and bartenders as a result of the Power & Light District. We’ve just diverted the economic activity downtown.