In a recent paper, Michael D. Farren and Matthew D. Mitchell compare economic development incentive decisions by two states to the prisoners’ dilemma in game theory. Examining this interesting comparison may provide insights into the Kansas–Missouri border war and better explain why policymakers continue to give out these harmful incentives.

In the classic prisoners’ dilemma situation, two armed robbers have been captured by the police, but there isn’t enough evidence to convict them, so they are questioned separately. Each prisoner can either confess and throw his partner under the bus in exchange for a deal, or remain silent. However, each prisoner knows his sentence is also influenced by the other prisoner’s actions. The police have outlined four scenarios for each prisoner, which are shown in the diagram below. The left side shows the options for Prisoner A, the top shows the options for Prisoner B, and each square shows the results of the corresponding actions. 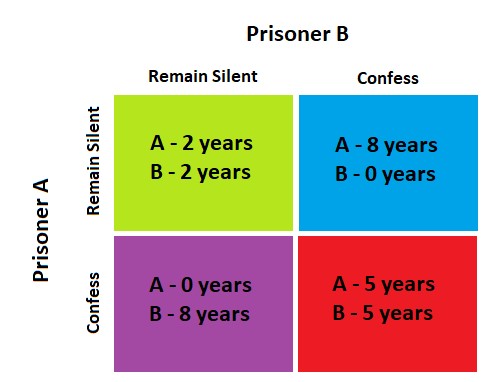 Though it would collectively be the best decision for both prisoners to remain silent (only 4 years in prison total, instead of 8 or 10), each has an incentive to confess and betray the other. If Prisoner A confesses, he will either do 0 years instead of 2 if B remains silent or 5 years instead of 8 if B confesses. Prisoner B has the same incentives, so it is also in his best interest to confess.

Because each prisoner cannot know what the other will do, he will act in his own self-interest and confess to avoid more jail time, bringing them to the red square. Here is the prisoners’ dilemma: Each player acting in self-interest actually leads to an outcome that is collectively and individually worse than if both had chosen a different option.

Let’s take a hypothetical scenario where Kansas and Missouri policymakers are deciding whether to provide economic development incentives, without knowing the other’s decision. Ideally, policymakers would consider the research and not give out subsidies, which would result in the most economic growth for both states(outlined on pages 13–14 of the paper).

That is a desirable outcome for both policymakers and citizens; however, the payoffs of this decision would accrue in the long term. When considering the complex decision-making process of policymakers, Farren and Mitchell point out that short-term political support may be an even more compelling motivator. Because of this, we are likely to see decisions that mirror the figure below, with decisions made based on political support instead of economic growth.

The dilemma is clear: Policymakers act on their short-term self-interest and offer subsidies, which slows economic growth.

So perhaps the prisoners’ dilemma explains why Kansas and Missouri policymakers offer subsidies when the evidence is stacked against their effectiveness. The best solution to a prisoners’ dilemma is for the two parties to somehow come together and agree to pick the communally favorable option. The solution provided by these researchers is an interstate compact. We’ve seen Kansas and Missouri attempt this with their border truce, but the desired results haven’t come to fruition. Finding a way out of the prisoners’ dilemma could be the key to stopping these wasteful incentives and boosting economic growth in Missouri and Kansas.