We’ll Gladly Pay You On Tuesday for Teaching Today

J. Wellington Wimpy, the burger-eating cartoon character from the Popeye series, may have been best known for saying, “I’d gladly pay you Tuesday for a hamburger today.”  It may sound crazy, but in some ways we are saying the same thing about teachers—we’ll gladly pay you in retirement for teaching today.

Nat Malkus, an education policy research fellow at the American Enterprise Institute, has a terrific piece this week in U.S News & World Report, “Beware the Cost of Teacher Benefits.” In it, he shows that school districts are increasingly spending money on benefits, such as teacher pensions, at the expense of teacher salaries. Nationally, benefits increased from 21 percent of total compensation in 2003 to 28 percent in 2014.

Because of what I know about the issues with Missouri’s teacher pension systems, Malkus’ analysis got me thinking about how much of a school district’s total current expenditures go to salary and benefits. Using data from the National Center for Education Statistics, I found out.

In 1998, nearly 80 percent of total current expenditures went to salary and benefits.  Sixteen years later, the percentage was hardly changed at 79 percent. The big difference, however, was the shift from salary to benefits. In 1998, salary comprised 66.8 percent of total current expenditures and benefits were 12.7 percent. In 2014, salary had dropped to 60.6 percent and benefits climbed to 18.2 percent. (See the figure below; note that the vertical axis begins at 50 percent.) 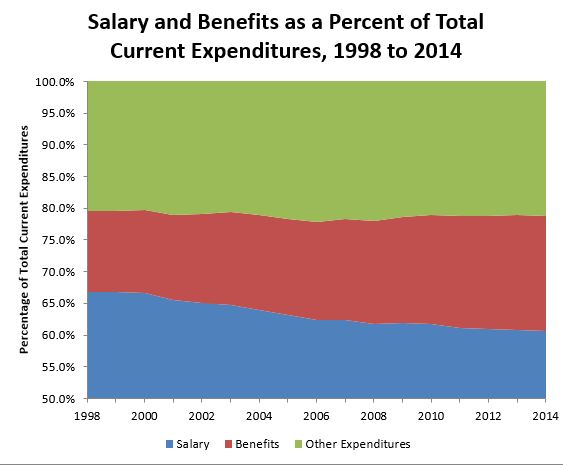 In the graph below, I separate out teachers’ salaries from their pension contributions to show the trend. As you can see, the percentage of school district expenditures that goes to benefits has grown substantially during this period. 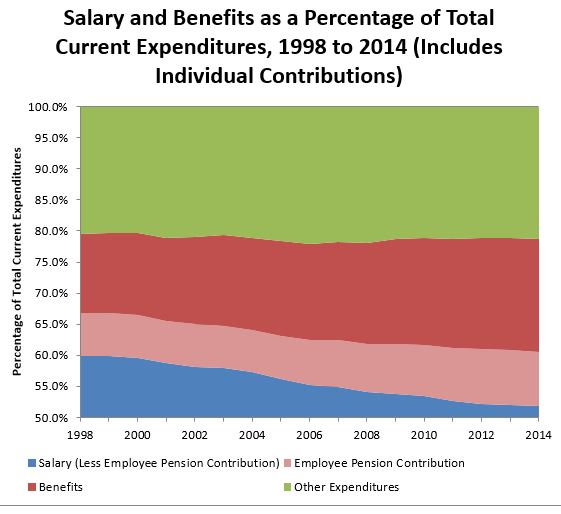 Once we account for teacher contributions to their pension system, teacher salaries in Missouri total less than 52 percent of Missouri school districts’ total current expenditures. Meanwhile, benefits (including employee pension contributions) account for 27 percent. And this doesn’t even take into account payments toward insurance premiums teachers are required to make or the 14.5 percent pension payment on the value of benefits they receive from their school district they are required to pay as well.

Pensions and benefits are consuming more and more of our state’s educational resources. What this means for teachers is that more of their compensation is delayed compensation. We’ll pay them on Tuesday for teaching today.

There is nothing wrong with having great benefits and a secure retirement. Yet this shift is alarming for two reasons. First, it helps perpetuate the idea that teachers are underpaid, because people rarely consider benefits when making wage comparisons. Second, this trend is a warning sign. Our pension liabilities are growing and they are diverting money from other important areas, such as salaries. If we want a competitive teacher labor market in the future, we have to address pension issues today.