Missouri Pensions Reward Some, Punish Others

Defined-Benefit public employee retirement systems are terrific for those who stay their full career in a single system. We all can agree on that. But there are a lot more people paying into, and receiving benefits from, the pension system than just individuals who stay their whole career in a single system. This was highlighted as I read a piece on Missouri teacher pensions by KOMU reporter Megan Judy. The article offers quotes from Kathy Steinhoff (a Hickman High School math teacher), Steve Yoakum (executive director of the Public School Retirement System of Missouri), and the Show-Me Institute’s Mike McShane. 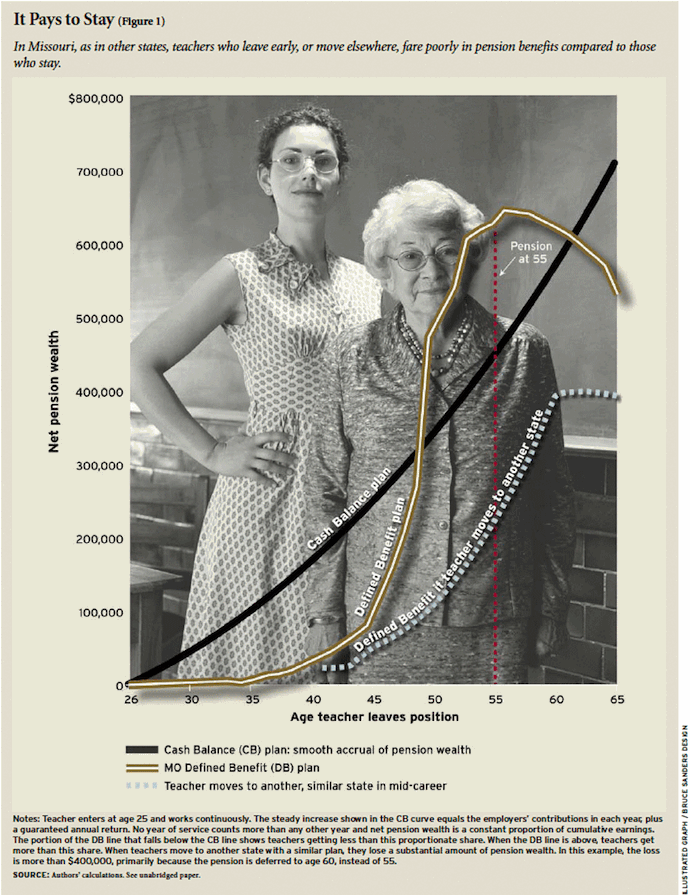 Based on Steinhoff and Yoakum’s comments, I’d like to make three points:

Point #1: Pensions Take From Some to Reward Others

The generous teacher retirement benefits for those who stay in the system for their full career are made possible by the contributions of those who leave the system early. According to Yoakum, “The retirement system is designed to provide a career employee in Missouri schools with roughly the same standard of living they had.” The key phrase there is “career employee.” Workers who leave early face a severe financial penalty.

As McShane pointed out in the article (and as I’ve noted before on the Show-Me Institute blog), benefits from the teacher pension system do not exceed a teacher’s contributions until they have worked for 28 years. 28 years! As a report from the Urban Institute noted, 62% of Missouri teachers do not stay for that long. The majority of teachers are not benefiting from the pension system, but are instead subsidizing the benefits of others.

Point #2: Retirement Benefits are an Ineffective Way to Recruit Teachers

Yoakum contends that the pension system is helping recruit teachers to Missouri. This is a poplar refrain among pension supporters. At first glance, the argument makes sense—better benefits attract more people. The problem is that people, especially young people, typically don’t pay much attention to their retirement benefits. This is illustrated by the quote from Steinhoff, “It is the best kept secret even within the profession because, for most teachers, it doesn’t come on their radar until they’re teaching for about 25 years.” I fail to see how a well-kept secret helps recruit teachers.

As a National Bureau of Economic Research report notes, employees value current pay much more than they value deferred compensation into a pension system.  Thus, a better way to recruit and retain teachers might be to pay them more now, rather than promise them more later.

Point #3: Pensions Pull Some to Stay, Push Others Out

OK, maybe pensions aren’t the best way to recruit new workers, but they do help keep teachers in the system, right? As Yoakum said, “From the employer standpoint, it does provide golden handcuffs to a certain extent. When a teacher has accumulated a certain years of service, it’s very hard for them to leave. This helps our school districts retain those very good teachers.”

This “Golden Handcuffs” phenomenon is discussed by economists Robert Costrell and Michael Podgursky in an Education Next article with the same name (see their excellent illustration above). The yellow line is the value of Missouri’s teacher pension system, while the black line represents a smooth-accruing cash balance plan. This shows how teachers who leave early are worse off under the current system. As a result, Costrell and Podgursky agree with Yoakum that the back-loaded nature of PSRS pulls teachers to stay until full retirement—but at a cost. First, there is no indication that the “pull” is felt only by the “very good teachers” to whom Yoakum alluded. Indeed, there may be some teachers who are burnt out and want to retire, but feel compelled to stick it out until they reach full retirement. How is that good for kids? And after a teacher reaches their peak pension value, the system punishes them and pushes them out. Thus, beyond a point, the system acts as a disincentive for veteran teachers to stay.

We cannot accept the merits of defined-benefit pension systems simply because they provide a terrific benefit to a fraction of our teachers. Rather, we should consider whether the system is designed to provide fair retirement support for every teacher in Missouri. Clearly it is not.