The Private Provision of Mass Transportation

This is an extremely interesting (and relatively short) video, made by PBS’s Frontline and NPR’s Planet Money, about the private buses in Haiti called “tap-taps.” The buses shuttle residents of Port au Prince around the city for just a few pennies per trip, which is necessary because most Haitians make less than $2 a day. The buses are extremely competitive and completely unregulated, so the owners of the buses have devised a method of signaling which buses are well-maintained and staffed by good drivers, and which aren’t: elaborate murals painted on the sides of the buses. If an owner is not willing to stringently maintain the outside of the bus, chances are the internal workings and driver leave something to be desired as well.

We need not eliminate Metro to find out whether a competitive system can replace the current monopoly. If Bi-State simply allowed private bus lines to compete, and the cities and counties in the area loosened the regulations on jitneys and taxis, we could very well see many cheaper and more efficient transportation alternatives emerge. Metro would still have an unfair advantage because of its public subsidy, but we could decrease that subsidy and use the savings to instead institute mass transportation vouchers for people below a certain income level. These people could then use the vouchers to ride the transportation system of their choosing.

It’s possible that the public transportation system would still outperform the private sector, and the devil is always in the details, but economic theory and massive amounts of historical experience show that monopolies are inefficient and charge high prices while competition improves products and lowers prices. We should not expect mass transportation to be any different; the burden of proof should be on those who defend the monopoly system. If private mass transportation can operate in Port au Prince, where per-capita income is less than 1/35 of the level in the United States, it’s at least worth trying here. 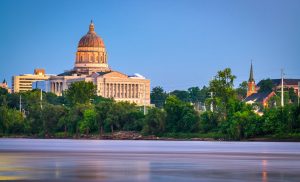 Using Missouri’s Fiscal Relief and Infrastructure Funds to Grow the Economy, Not Government

Commentary: A Tsunami of Bad Policy
Connect With Us