Greater Kansas City is on a roll—almost a week doesn’t go by when we’re not on a top ten list of one kind or another. Where we always lag is in creation of jobs and economic growth; we always lag our peer group cities.

Not only is Kansas City lagging our peers overall, but city policy is seriously failing to help those who need it the most. According to the left-leaning Brookings Institution, while Kansas City is having middling success at growing the economy and building wealth relative to other metropolitan areas, it is performing poorly at spreading it around. Over the past ten years, Brookings ranked Kansas City 46th out of 100 at growth and prosperity. Yet we’re down by the bottom for inclusion—a combination of employment, median wage, and relative poverty.

In the chart below, Brookings calculates that over the past ten years the Kansas City region has seen a decrease in the median wage of 7.7%, an increase of 12.5% in relative poverty, and a regional decrease in employment by 3.5%. Despite claims about caring for every neighborhood and every socioeconomic level, civic leaders have failed to deliver to those in the most need. 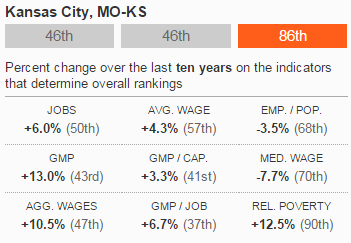 Supporters of the status quo may like to gather like latter-day Gatsbys and tell us how swimmingly everything is going in Kansas City while they lay out their ambitious plans for the future. They direct us to all the shiny new things they’re building downtown with taxpayer dollars. But it’s worth remembering that far too many people are being left out of the party.