This is arguably old news for Show-Me Daily readers, but lest there be any doubt, the New York Times helpfully confirms the point: the Affordable Care Act (ACA) has failed to lower the cost of health insurance for rural Americans.

While competition is intense in many populous regions, rural areas and small towns have far fewer carriers offering plans in the law’s online exchanges. Those places, many of them poor, are being asked to choose from some of the highest-priced plans in the 34 states where the federal government is running the health insurance marketplaces, a review by The New York Times has found.

So, what’s going on? [Emphasis mine.]

The analysis suggests that the ambitions of the Affordable Care Act to increase competition have unfolded unevenly, at least in the early going, and have not addressed many of the factors that contribute to high prices. Insurance companies are reluctant to enter challenging new markets, experts say, because medical costs are high, dominant insurers are difficult to unseat, and powerful hospital systems resist efforts to lower rates.

“There’s nothing in the structure of the Affordable Care Act which really deals with that problem,” said John Holahan, a fellow at the Urban Institute, who noted that many factors determine costs in a given market. “I think that all else being equal, premiums will clearly be higher when there’s not that competition.”

I’ve said it before and it needs to be said again: The Affordable Care Act doubled down on a broken status quo, neglecting the importance of genuine competition in getting the cost of health insurance down. Taxpayers buying insurance through an ACA marketplace are seeing this failure firsthand, not only with fewer health insurance choices, but also narrower hospital networks within those choices. And as we know, those price and competition problems aren’t reserved to rural Missourians alone in the Show-Me State, as this New York Times graphic reaffirms. 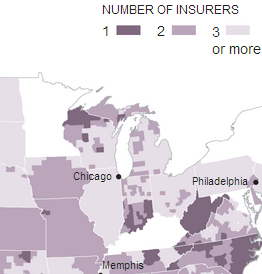 Having, at most, two insurers in each county statewide — and in some cases, only one “option” in a county — is simply not enough to rein in the cost of insurance. If we really want to bend the cost curve of health care down, we need genuine, robust competition in health insurance. The ACA clearly isn’t getting that job done.

Increasing Access to Health Care in Missouri During a Pandemic – and Beyond
What’s Really Happening with Medicaid Enrollment?
Connect With Us