Following on the heels of its $1.9 trillion stimulus bill, the Biden administration just unveiled another multitrillion-dollar spending plan, this time notionally aimed at fixing America’s infrastructure needs. Unfortunately, the “American Jobs Plan” is just as much a misnomer as the “American Rescue Plan,” in that it does more to push liberal political goals than to light a fire under the economic recovery or long-term growth.

America’s infrastructure needs are genuine and significant. Investment in basic infrastructure (power, transportation, water supply, etc.) has failed or barely kept up with depreciation, leaving the country with an aging infrastructure stock with dwindling years of remaining service life. Moreover, although the United States spends roughly the same on infrastructure as it did in 1956 in inflation-adjusted per capita terms, it gets less bang for the buck today. In particular, the cost per mile of interstate construction has more than tripled in inflation-adjusted terms since the 1960s.

This combination of flat spending and rising costs means less actual new infrastructure. Worse yet, costs vary widely across states. From 1956 to 1993, high-cost states spent more than $8.8 million more per mile of interstate than low-cost states, and $3.3 million of this differential is due to factors under policymaker control. Thus, rather than measuring the ambition of a bill by the sticker shock of its price tag, a superior metric is to evaluate the quantity and quality of infrastructure it is likely to produce and what spillovers it will generate for economic productivity. On both counts, the Biden Administration’s plan falls far short.

First, the composition of spending in the bill appears not to have gone through any credible cost–benefit analysis to determine where best to allocate scarce (or not so scarce, given the size of the bill) dollars. For example, the American Society of Civil Engineers reports that 20 percent of the more than 4 million miles of roads in the United States are in poor condition; the same report estimates a nearly $800 billion backlog of maintenance and repair needs. Why, then, does only 5 percent of the bill (see Figure 1) go to roads and bridges, only promising to fix 20,000 miles worth of road? Moreover, why spend nearly the same amount on public transportation even though only 5 percent of people rely on it to get to work? The bill also includes Medicaid expansion of home and community-based services (HCBS) masquerading as “infrastructure.” The administration every right to make its case for a “care economy” agenda, but simply calling it infrastructure to piggyback off of the popularity of spending on roads and bridges does not make it so. 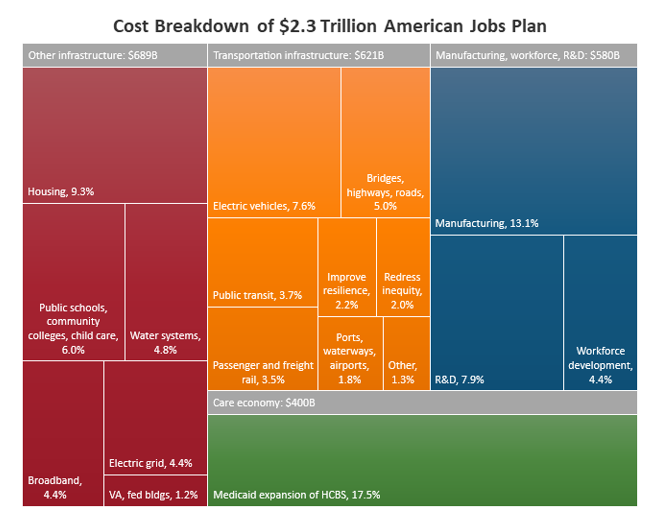 Secondly, and more egregiously, the American Jobs Plan’s prevailing wage, project labor agreement, and PRO Act provisions are a huge giveaway to unions that would likely raise costs, reduce growth, tilt the playing field, and overturn the will of voters in states that passed right-to-work laws to safeguard worker freedoms. The practical effect of these measures will be to reduce the number of infrastructure projects that can get completed for a given amount of spending and to needlessly harm economic performance through the elimination of worker freedom protections.

Lastly, the Biden plan partly finances the eye-popping $2.3 trillion price tag by raising the corporate income tax, thereby undermining the very competitiveness that infrastructure investment is supposed to enhance. Even the administration tacitly admits the harm such a tax hike will cause for the economy, offering only to beg other countries to raise their own taxes to prevent them from attracting companies looking for friendlier business environments in what the Biden administration misleadingly calls a “race to the bottom.” It’s hard to imagine any countries taking us up on the offer. In all fairness, the American Jobs Plan does promise workers whose jobs are displaced counseling and case management services, though many will unsurprisingly prefer to keep their job instead.

In sum, America’s infrastructure could use a jolt of investment, but the spending priorities in the bill are off target and in many cases unrelated to true infrastructure. The bill is littered with union giveaways that will raise costs and reduce the quantity of new infrastructure that could otherwise be produced, and the promised corporate tax hikes counteract the same economic growth that infrastructure spending aims to ignite. But it’s not too late. The Biden administration should learn from previous mistakes, when the Obama stimulus failed to improve the nation’s highways, and instead refocus on a pro-growth and fiscally responsible approach to solving America’s pressing infrastructure needs.

Chief Economist
More about this author >