The “recovery” of the last seven years remains the worst in postwar American history. Average gross domestic product (GDP) growth since the bottom of the recession in 2009 was barely above 2.1% per year. The average since 1949 is well above 4% per year during the previous 10 expansions.

GDP Growth during the Expansions of the Post-WWII Period 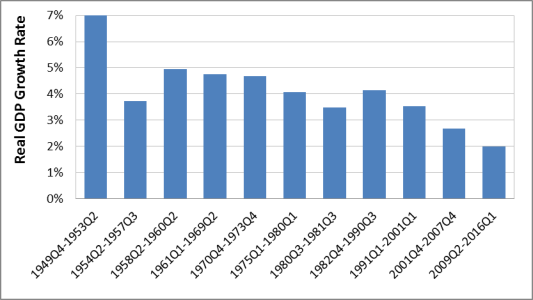 Source: CRS calculations based on data from the Bureau of Economic Analysis (BEA).

Note: Economic expansions as identified by the National Bureau of Economic Research.

I believe the root cause of abysmal growth is the huge tax increases imposed by President Obama and Congress since 2008. The most harmful were the increase in the capital gains tax from 15 to 20 percent, the increase in top bracket income from 35 to 39.6 percent, and the new tax of 3.8 percent on investment income in the Affordable Care Act (ACA). The massive increase in regulatory burden through the ACA and Dodd-Frank bills are also crushing, but unfortunately are harder to measure.

The three tax increases mentioned above (plus higher state and local taxes) directly lower expected returns on all investments. Our government grabs the fruits of investment and then is puzzled when businesses do not invest. This causes billions of dollars of investment projects to come off the table.

Weak investment is the signature feature and cause of the abysmal "recovery" under President Obama. The aggregate of all investments in the United States is Net Private Domestic Investment (NPDI), computed by the Bureau of Economic Analysis. Relative to GDP, NPDI averaged 7% per year from1960 to 2008. The average was 7 to 8 percent from 1960 to 1990, and 6.5 percent in the Clinton and George W. Bush years. However, for the Obama years NPDI was an astoundingly low 2% of GDP!

In every year of Obama’s presidency but 2015, NPDI was worse than in any year from 1960 to his inauguration. This isn't bad luck. If nothing changed in the economy, the likelihood of having a period as bad as Obama’s just by chance would be 1 in 1000.

The numbers for GDP and NPDI are interesting, but they’re still just lifeless statistics. The human toll is terrible, taking the form of millions of Americans who can’t find jobs or can’t make ends meet in the jobs they do have.

Dismal investment levels are the predictable result of taxing investment and income at high rates. This terrible economic performance will continue until income and investment taxes are slashed. The government can still raise needed revenue with a broad-base approach, eliminating all the special deductions and credits and allowing very low rates.

On the other hand, maintaining the current high rates will entrench lackluster investment and stagnant incomes and trap far too many Americans in a bleak economic future.