The start of a new year is a great time to reflect on the past and make resolutions for the future. As the 2021 legislative session begins, we can put this into practice with Missouri cities by looking at their growth over the last few years and brainstorming “resolutions” to improve growth.

Missouri has eight metropolitan statistical areas (MSAs), a term used to describe a city with a population of at least 50,000 and the surrounding area. Below is a graphic from my latest publication, The 2020 Missouri Tax Landscape, which provides an overview of Missouri’s economy and taxes at the state and local levels. The compound annual growth rate (CAGR) of these MSAs is a calculated rate helpful for evaluating growth over time. While GDP growth is volatile, the CAGR provides a calculated rate as if the growth had occurred at a steady rate during the period. 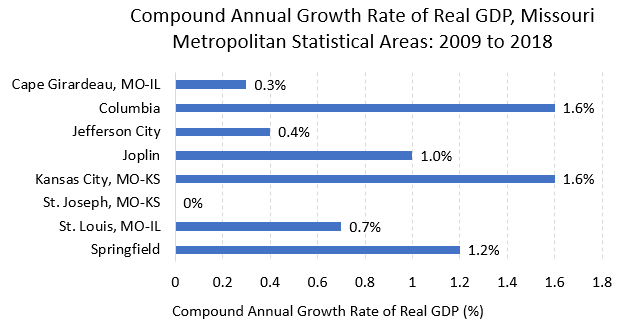 Columbia and Kansas City had the highest growth rates from 2009 to 2018, growing by 1.6 percent each year on average. St. Louis grew by less than half of that rate—a meager 0.7 percent. The CAGRs of Missouri’s largest MSAs are nowhere near those of large MSAs in surrounding states. In the same period, Oklahoma City, OK grew by a rate of 2.9 percent; Cincinnati, OH-KY-IN by 2.4 percent; and Omaha-Council Bluffs, NE-IA by 2.2 percent. Additionally, all of Missouri’s MSAs fell below the national growth rate of 2.3 percent during this period.

There are a lot of factors that contribute to a metro area’s growth, and the tax climate is certainly one of them. High tax rates take spending money away from citizens and make cities and states less attractive to people and businesses. There’s a plethora of research showing that taxation (and especially taxation on income) has a negative effect on economic growth. Given the low growth rates of Missouri’s MSAs, it may be time for some tax-related New Year’s resolutions.