Missouri’s low unemployment rate is welcome news, but it doesn’t tell the whole story. There are other important factors that predict economic well-being, such as labor force participation and statewide output, where Missouri’s economy is underperforming compared to other states. Tennessee, for example, is a demographically similar state but has shown significant growth compared to Missouri while also boasting a 3.5 percent unemployment rate.

As shown in the graphs below, Missouri’s labor force is stagnating. During an economic expansion, one would expect the number of interested laborers to increase. Missouri, however, defies these expectations. Our labor force shrunk by almost 30,000 people from 2016 to 2017. In this same period, our neighbor to the southeast, Tennessee, saw a spike in their labor force with 81,000 people joining.

People are entering the workforce in Tennessee to take advantage of the employment opportunities there. Some are Tennessee residents who have decided to look for work, and some are coming from outside the state. The state’s low unemployment rate suggests that Tennessee is capable of absorbing these additional potential workers and turning them into payroll employees. Compared to Missouri, Tennessee is attracting and employing people at a faster rate. 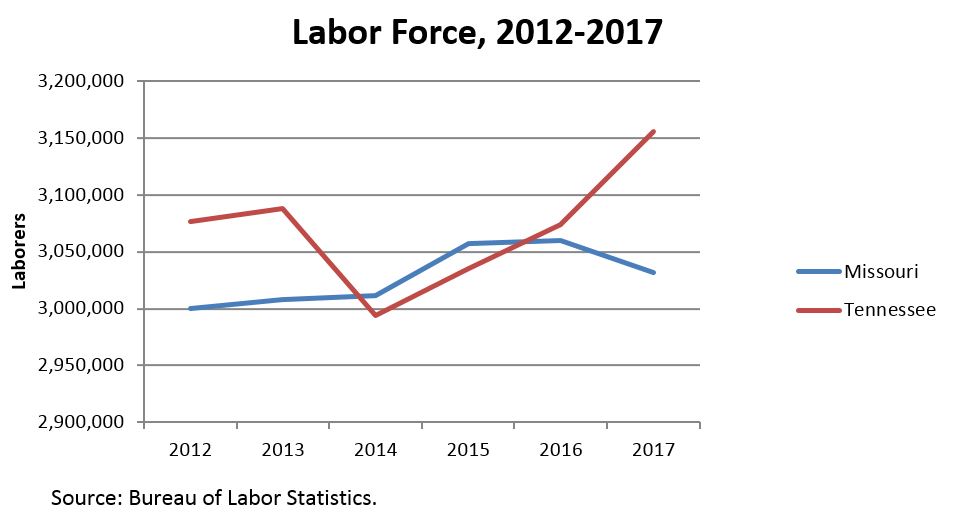 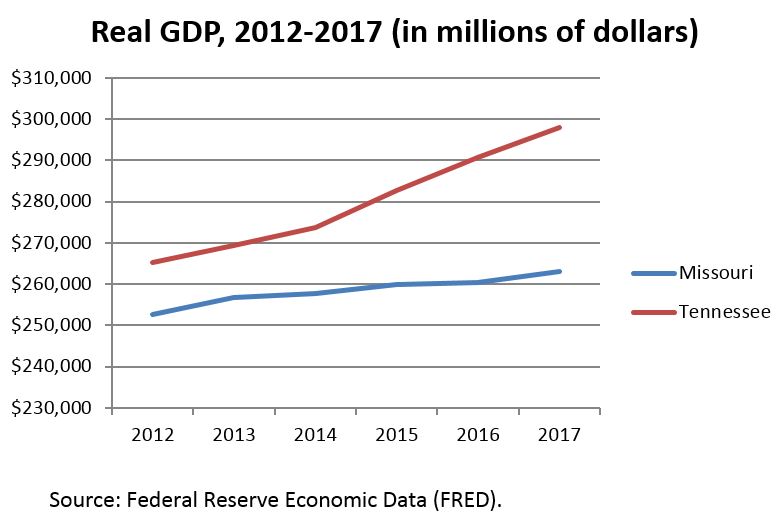 Such slow growth is problematic for Missouri’s economy. The national economy is doing well, but Missouri is failing to take advantage of the rising levels of consumption, investment, and employment found throughout the country and is consequently losing out on major economic opportunities.

So what about Tennessee as compared to Missouri makes its economy grow faster and pull more people into the workforce? There are a few possibilities. First, Tennessee has no income tax, and two years ago Tennessee began to phase out the tax on investment income and will eliminate it entirely by 2022. Second, beginning in 2014 Governor Bill Haslam started reforming higher education by offering all high school graduates the opportunity to earn an associate’s degree or professional certification at no cost to them. Moreover, there has been greater coordination between colleges and businesses to ensure that the curriculum fits employers’ needs so that students learn skills that are in high demand. Third, Tennessee is a Right-to-Work state. Fourth, Tennessee is known as having a business-friendly environment.

It may be hard to pinpoint exactly what has led to Tennessee’s success, but tax-cutting policies combined with investment in workforce development and other pro-business policies like Right to Work stand out as reasons Tennessee is experiencing growth that Missourians can only envy. Continuing to push for elimination of the individual income tax and exploring potential workforce development policies could work just as well in Missouri.

More about this author >
About the author