For the state of Missouri, every quarter seems to be an unremarkable quarter of personal income growth. And this latest quarter was just as plain-vanilla. U.S. Bureau of Economic Analysis (BEA) just released personal income growth estimates for the second quarter of 2016 and Missouri was middle of the road with a pedestrian 0.98% growth over last quarter. Missouri’s growth rate was just below that of the nation as a whole, and we ranked 28th out of the 50 states. 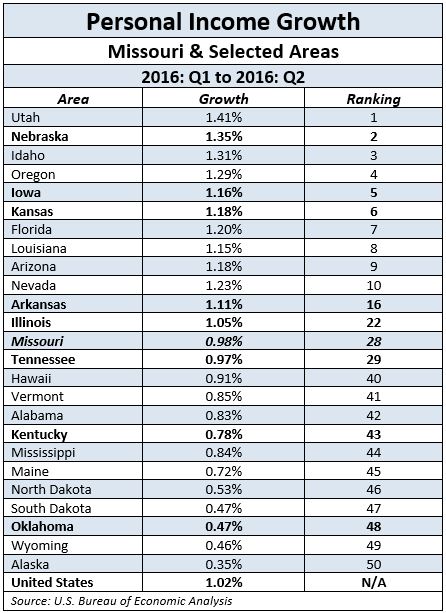 If you have a high-skill occupation, you’re probably doing better than the BEA data indicate at first glance. The largest contributor to growth came from professional, scientific, and technical jobs; management of companies; and health care and social assistance jobs. On the other hand, moderate- to low skilled jobs showed little or no growth (see Table 3a and Table 3b on the “Tables Only” link here). While it is understandable that every state can have an unimpressive quarter, those with a vested interest in the state’s economic environment shouldn’t be satisfied with a consistent mediocre performance.