The Financial State of Missouri Cities

It won’t be a surprise to readers of this blog that Kansas City and St. Louis are in bad financial shape. Taxes and debt are both high. But a recent study of American cities finds that things may be even worse than we thought.

The reason for the discrepancy is that according to the report, “cities balance budgets using accounting tricks” such as moving payments to a different year or failing to make sufficient payments to public pension funds. None of these solve the problems, of course; they just shift the burden to future taxpayers.

The organization Truth in Accounting, a nonprofit dedicated to honest accounting in municipal finances, “developed a sophisticated model to analyze all the assets and liabilities of the nation’s 75 most populous cities, including unreported liabilities.” Kansas City and St. Louis are ranked 55th and 66th (lower on the list means higher unreported liabilities), respectively. How did this happen?

While both Kansas City and St. Louis have balanced budget requirements, both have accumulated a great deal of debt. The report points out that cities can do this by inflating revenue assumptions, understating the true cost of government, and delaying the payment of bills.

The report also states that most of the top U.S. cities do not have enough money to pay their bills. In the aggregate, these cities have $335 billion in unfunded debt. That includes $211 billion in pension debt, largely the result of cities papering over their cash problems by shortchanging their public pension obligations:

Although these retirement benefits will not be paid until the employees retire, they still represent current compensation costs because they were earned and incurred throughout the employees’ tenure. Furthermore, that money needs to be put into the pension fund in order to accumulate investment earnings. If cities didn’t offer pensions and other benefits, they would have to compensate their employees with higher salaries from which they would fund their own retirement.

Missouri is no stranger to these problems. The problems at the state level are well publicized, but there are also serious issues at the municipal level.

These are just some of the highlights; the entire list of factors contributing to the financial woes of St. Louis and Kansas City is too long to cover in a blog post. As we enter the new year with a list of new projects and priorities, perhaps policymakers should spend less time fixating on pie-in-the-sky solutions, like luring Amazon to the state. Instead, they should  focus on the less glamorous but more important task of regaining sound fiscal footing. 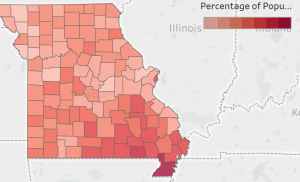 Map: Medicaid Spending and Enrollment by County in 2016
Reducing Mandatory Minimums
Connect With Us