Public funding for higher education has been on the wane in Missouri. As Mike McShane pointed out in his 2017 Show-Me Institute essay, “Stuck in the Middle with Mizzou,” state support for higher education, in inflation-adjusted dollars, decreased by 20.4% from 2000 to 2015. The national average, for comparison sake, was a 1.2 percent decrease. During this period, just 9 states had bigger decreases in state support. In that same period, tuition in Missouri rose 9 percent. In comparison, the average tuition growth was nearly 18 percent among the nine states that had higher decreases in state funding. Among our border states, Kentucky and Nebraska saw similar tuition increases while all the others had larger increases. Oklahoma and Illinois, for instance, increased tuition by 17 percent while Arkansas and Tennessee increased tuition by 18 and 22 percent, respectively. 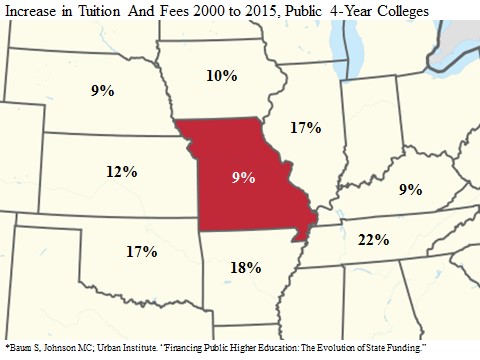 Missouri’s tuition increases are lower than most other states because state law prohibits colleges and universities from increasing tuition beyond increases in the consumer price index. The point here is that Missouri’s institutions are getting a double whammy. They are seeing reductions in state revenues and are simultaneously limited from raising additional funds through tuition.

To some, this doesn’t sound so bad. There has been growing concern about the rising costs in higher education. And increasingly, there is concern about the seemingly illiberal attitudes on college campuses that shout conservative speakers down. And we all remember the fiasco at Mizzou a few years ago.

These are legitimate concerns. Indeed, as George Mason economist Bryan Caplan has suggested in his recent book, The Case Against Education: Why the Education System Is a Waste of Time and Money, there are compelling arguments against public subsidies for higher education.

There are few solid arguments, however, for not allowing colleges and universities to raise tuition to the level they deem appropriate.

I understand the sentiment of wanting to make college affordable, but there are better ways to do it. For example, as mentioned in SMI’s Blueprint on Higher Education, Missouri could encourage competency-based education programs or income share agreements.

Prices are the thing that help the free-market flourish. Prices tell producers where they can make profits, and prices allow consumers to choose wisely. Tuition caps are anti-free market because they distort the true cost of a college education by artificially keeping the sticker price low. It’s time to remove these artificial caps and allow more free-market policies into higher education.